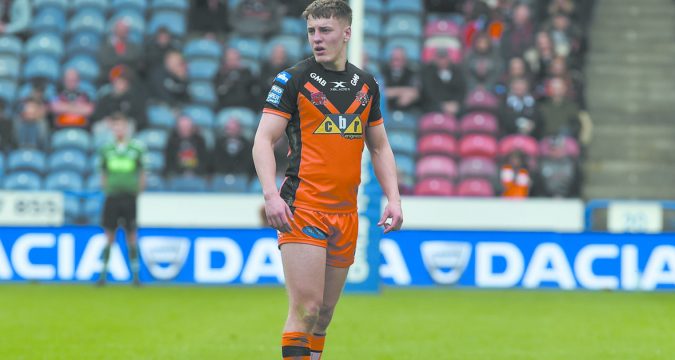 Castleford coach Daryl Powell has hinted that Jake Trueman’s long-term future could be at fullback.

The 19-year-old excelled over the Easter period at fullback, with regular number one Ben Roberts moving to half-back.

And Powell revealed that given how impressed he’s been by Trueman’s exploits in a largely unfamiliar role, he cannot role out a long-term run in the position.

“He has only starting playing this year at fullback,” Powell said.

“He had three or four training sessions in there before his first game. He has handled it incredibly well.

“He ran over the top of Kevin Brown (on Easter Monday against Warrington) and while he lost the ball in contact after that, he’s a tough kid with loads of ability and we’re going to see a lot more from him this season at full-back I think.

“He has done incredibly well.”

Powell also admits he’s been impressed with how the former Bradford junior has handed the pressure teams have thrown his way.

“For a young player to go in there and play as he has at fullback, he came off the bench at Leeds in a powder keg of a situation, then played in two ‘watersplash’ games at full-back.

“I can’t speak highly enough of him and what he has done there. The half-back position becomes really competitive and it’s a tough one.

“I’ll look at it week on week. We haven’t nailed that right-edge yet, I’m looking for someone to grab hold of that right edge and deliver what we need.

“But everybody’s gone after him and he’s handled it pretty easily. Teams are going to stop doing it when they realise there’s not a weakness there.”