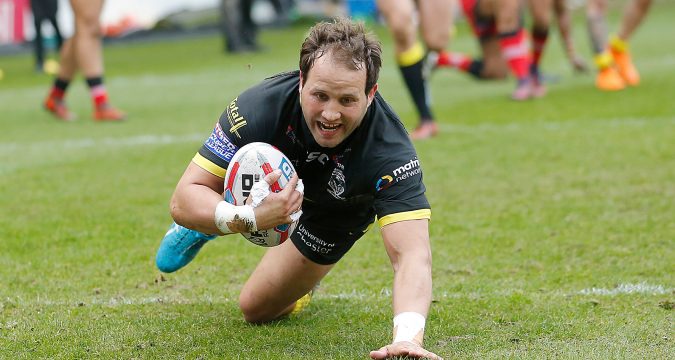 Tyrone Roberts insists he has no regrets about moving to Super League with Warrington – admitting his family are settled and he is slowly adjusting to the British game.

The 26-year-old has been an integral part of a Wolves side which have won their last five games, including Saturday’s victory at Salford.

And he admits he’s perfectly happy with his decision after leaving Australia for Warrington.

He said: “The weather is getting there, and it’s getting warmer now, which is one thing!

“I’m enjoying it, the family are enjoying it and it’s great to be a part of this club.”

Roberts did, however, concede he has taken some time to get used to the style of the British game upon joining the club.

“It’s hard to adjust at first, because you have to know the combinations and players around you,” he said.

“The game is totally different though; it’s much more free-flowing in England and you’ve got to be disciplined. You can’t give sides too much possession over here – it’s a change but I’m liking it and I’m enjoying it.”

And Roberts also believes his partnership with Kevin Brown is beginning to flourish after limited training time together in pre-season.

He said: “Me and Kev only trained once or twice before the season started, but we’re coming together now and everyone is believing in what we can do as a group after a slow start.”

Meanwhile, coach Steve Price believes his side are slowly fulfilling their potential.

He said: ““We are slowly building into the team we can be. We are showing it in a lot of areas but we understand there are areas we need to improve.

“There are glimpses of it and we are heading in the right direction. There’s still a lot of footy to be played and if we keep displaying those types of performances then the big picture will take care of itself.”