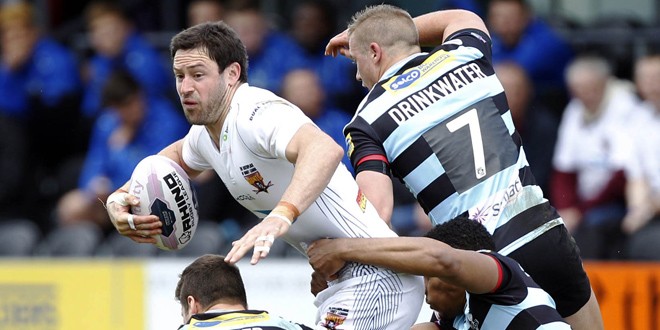 How it unfolded
The Giant scored an early try from Shaun Lunt, although Danny Brough couldn’t add the conversion.

But the Broncos replied on 18 minutes with a try by Atelea Vea, after good work by Scott Moore and Danny Farrar. Josh Drinkwater’s conversion gave the Broncos a 6-4 lead.

They then had to contend with mounting Giants’ pressure, which came to a head with a try by Ukuma Ta’ai beside the posts, which Brough was able to convert.

Any thoughts that the Giants would run away with the game were soon dispelled, however, when Leeds loanee Alex Foster scored, and although Drinkwater couldn’t convert, the teams were level after 32 minutes.

And the Broncos were soon in again, this time with a try by Denny Solomona, although Drinkwater could only hit the crossbar with his conversion attempt, but he did add a penalty soon afterwards for the Broncos to go in the sheds with a 16-10 lead at half-time.

The Giants came out for the second half looking as though they had been given a roasting by coach Paul Anderson, and within a minute they were level, after Brough converted a try from Anthony Mullally, and they grabbed the lead with Ta’ai’s second try, again converted by Brough.

With ten minutes to go the Giants got some breathing space when Brough landed a penalty for interference in the tackle.

And as the rain came down the Broncos couldn’t get back on terms, making too many error in the difficult conditions, while the Giants scored a try by Leroy Cudjoe, converted by Brough, in the last minute, and they were happy to have avoided a potential banana skin on their visit to The Hive.

The game was played in front of 1,035 spectators.