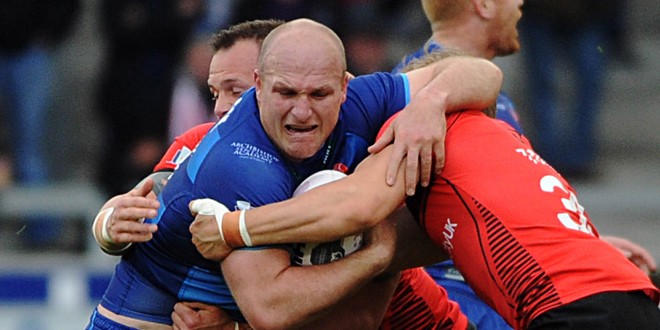 How it unfolded
The Red Devils looked sluggish early on, in contrast to the Robins, who were well led by Travis Burns, who registered an early 40/20 kick, while winger David Hodgson dropped the ball with the line at his mercy.

But after surviving early pressure the Red Devils scored the first try through winger Francis Meli, with Jake Mullaney unable to convert from wide out.

The Robins quickly countered, however with a try on 13 minutes from Kris Welham, who dummied the Devils’ defence to score, although Burns couldn’t convert.

And when Mullaney failed to hold a Burns kick, French forward Kevin Larroyer scored Rovers’ second, and this time Burns converted for a 4-10 lead that would remain until half-time.

In the second half Rangi Chase kicked an early 40/20 for Salford, but an error by Martin Gleeson in a tackle by Welham defused the danger.

The Robins were penalised harshly for dragging Gareth Hock into touch, and then they conceded a goal-line drop-out as Liam Salter was dragged behind his own line, and a penalty for a ball steal, with the Red Devils taking advantage of their field position for Meli to score his second try after good work by Junior Sa’u. Mullaney’s conversion levelled the scores.

After a great relieving run from Ben Cockayne, Rovers took the lead again with a try from Neville Costigan after Mullaney again fumbled a Burns’ kick.

With 15 minutes remaining Gleeson touched down a kick to the corner, and Mullaney again converted to level the scores.

Costigan thought he had scored again, but the referee disallowed his plea for a try, and Chase hit the crossbar with a drop-goal attempt from 40 metres.