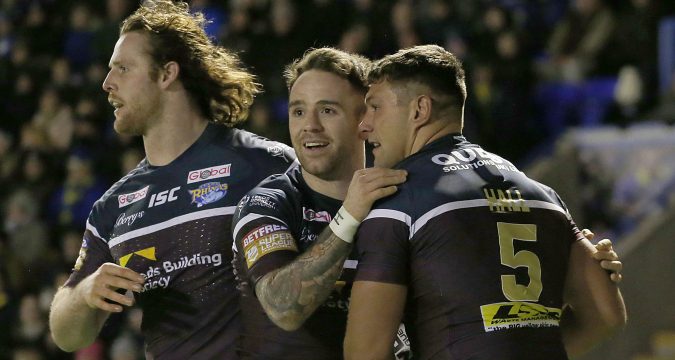 Last week’s performance against Warrington was absolutely superb. The halves seemed to gel very well and Jack Walker was phenomenal at the back. Our last tackle options appeared vastly improved on years gone by. Yes, there were a few teething problems, but this is hardly a major worry in the first game of the season. The injury to Nathaniel Peteru is a disappointment but not one that we can’t recover from. Despite this, there is plenty to look forward to going forward and I’m now certain this won’t be another 2016 for the Rhinos.

Looking ahead to Hull KR, this should be a good test for Leeds before heading to Melbourne on Friday morning. Rovers will undoubtedly be disappointed with their result against Wakefield last week and will hopefully bring their A-game to Elland Road. For our first home game, I would like to see Leeds play an expansive style of game that makes KR work hard.

From memory, most of our recent clashes with KR, last year aside, have been relatively even until the last quarter when we have generally run away with it. I don’t see this game going much different to that script unless Leeds blow KR away early on. The alternative is of course that we see a replay of London away in 2014 before the Challenge Cup Final where Leeds became the only side for the Broncos to beat all season. I think this is unlikely though and that Leeds will want a good performance under the belt before playing the Storm.

Regardless, I think it would be remiss to ignore how odd it will be to see Danny McGuire playing against Leeds on Thursday. I’m sure all Leeds fans wish him well with KR, but hope that he has an off day at Elland Road!

Hull Kingston Rovers’ dream return to Super League was shattered last Friday thanks to a sensational Tom Johnstone hat-trick. Wakefield Trinity’s pack were always going to dominate especially with many of the Rovers’ forwards dusting off the pre-season surgery cobwebs, however a little more was expected from the lacklustre attack.
Nevertheless, there is no greater vote of confidence after a defeat than the coach naming an unchanged 19 and with no fresh injury concerns, the Robins’ squad have the chance to bounce right back. Personally, I’d like to see a little more firepower from the back-row and the bench. Shaun Lunt and Ben Kavanagh now have their first minutes under their belts and will only get better and if he can cut out the piggybacks James Greenwood has the potential to be Rovers’ real strike threat.
Okay so let’s face the elephant in the room. The return of Danny McGuire. Albeit, not to Headingley Stadium, but against the club he served for two decades. Undoubtedly the playmaker will be the focal point of the Robins attack but will the emotion of the occasion cause the halfback to crack? Probably not. Will he exploit the Rhinos’ secret weaknesses? Perhaps so. Will he single-handedly guide Hull KR to a famous victory or will he stop trying to do everything, as told by Tim Sheens this week? Only time will tell. However, what we do know is that after a warm welcome from the (not actually in the south stand) South Stand, every man and his drum will be jokingly/seriously jeering at Mr McGuire, especially after his mandatory natter in the referee’s ear. I really admire the Rhinos’ style of play and expect them to be extremely strong and well-drilled but no matter what game or what sport, I’d never ever back my team to lose, so prepare for a season full of biased predictions.
Score prediction: Leeds Rhinos 16-16 Hull Kingston Rovers. Our Super League opener was so close yet so far. If we’re going to get our first win in Round 2, consistency needs to be the key word. Last week we were in great form for the first half and fell apart for the second, if we don’t learn to play for 80 minutes (or even for 60) then we’re in for a long season.

The Giants always seem to find it hard to bounce back when momentum goes against them, if Warrington get a few points on the board we need to not panic and stick to the game plan. We also need to make better use of our chances and get some points on the board. Last week we spent about 30 straight minutes on Hull’s try line and went into the dressing rooms at half-time only two points up. Admittedly Hull’s goalline defence was impressive, but we really should be doing more with our pressure.

The return of McGillvary to the squad will be a welcome one, he always gets in some good metres and has been known to score a try or two against the Wire. With two of last week’s better forwards missing in Lawrence and Walne, I’ll be hoping to see Ikahihifo back to his best to match Warrington’s intensity, ideally with Ta’ai carrying on the great form he showed at the KCOM.

Mamo can be a game changer on his day but his performance at Hull – his first competitive match in 6 months – left a lot to be desired. He’ll return to form eventually, but Stone will be hoping it happens sooner rather than later. With Warrington boasting players like Currie and Clark, we’ll need to be firing on all cylinders to get the win. But if we perform the way we did in the first half at Hull, we just might manage it.

Both teams go into this game off the back of a loss, and probably more importantly with a point to prove. The Giants had a tricky trip to Hull FC to contend with and came up short; whereas Warrington entertained the champions and also failed to overturn their opposition.

Playing the Giants normally means contending with the kicking game of Brough and as much as I like Jermaine McGillvary, I hope that he’ll still be one week short of match fitness. His try-scoring prowess in an England shirt was something to behold at the World Cup and any attack would be weakened by his absence. I’m sure he’ll have a great season, I just hope it starts next week.

For Warrington I witnessed the defeat to Leeds. I hate taking positives from losses but there were some good things to report. Roberts looks like a player with time, like he sees rather than just plays the game. Goodwin scored and can kick goals, and our defence already looked a lot tighter than last season, especially on the edges. Leeds though were very tightly drilled and their defence was fantastic. Had we nicked it at the end, they’d have been rightly very upset.

There were however, one or two things of concern to note from the loss. Our kicking game was lacking creativity, just continuous high bombs that Walker fielded easily right up until the last. Ratchford had his worst game in my memory at fullback and Hughes looked out of sorts. Then there was that Atkins dive!

Obviously a new coach and halfback combination will take time to settle in, but in rugby league the games come thick and fast and a loss against the Giants would make the upcoming fixtures against Widnes and Wigan a lot trickier.

Huddersfield away on a cold February night will be a tough ask for the Wire. But if they repeat their improved defensive efforts, kick better from hand and finish their sets smarter, continue to create chances, and moreover take them, then they will come away with the win.