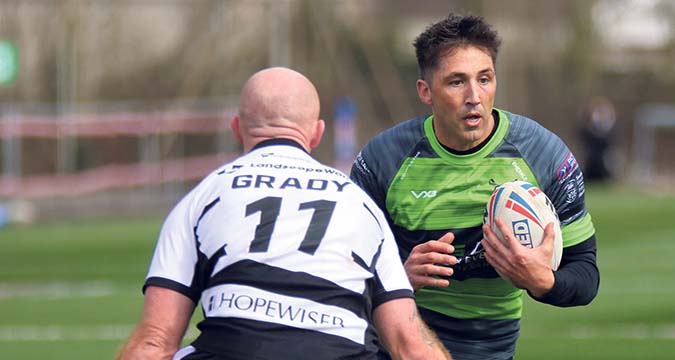 Widnes Vikings were party-poopers on Sunday in the first round of the Betfred Challenge Cup, when they travelled to Stebonheath Park in Llanelli and defeated West Wales Raiders 58-4 to spoil the debut of former Wales rugby union international Gavin Henson, who was making his Rugby League debut at the age of 39.

The Vikings dominated throughout the game against a spirited Raiders effort in a game that was televised on the BBC website.

Steve Tyrer and Jack Owens both scored try hat-tricks, with the Vikings scoring eleven tries in total. They will now have a home tie next weekend against Whitehaven in the second round of the competition.

Henson joined the Raiders on a 12-month after having spent six weeks training with the League 1 part-timers.

The 2005 British and Irish Lions tourist had not played rugby since being released by Welsh regional club the Dragons in 2019.

The Raiders competed well for 20 minutes, but they were not helped by Jamie Murphy’s red card for a tip tackle on Owen Buckley at that point in the game.

“I think we started well, we were competing with them, finishing our sets, but losing a man killed the game for us,” said Henson.

“But it’s our first game of the season, emotions are running high and these things happen.

“I learned a lot; it’s the first time I played the game. I watched it, but there’s nothing quite like playing.

“It’s so relentless, it’s non-stop. I need to get fitter basically. I think I did all right, I just couldn’t offer much because it was a very tiring game.

“We’ll take a lot out of it, it was like a training game in the end and the main thing for us is the league, and we’ve got six weeks before that starts.”