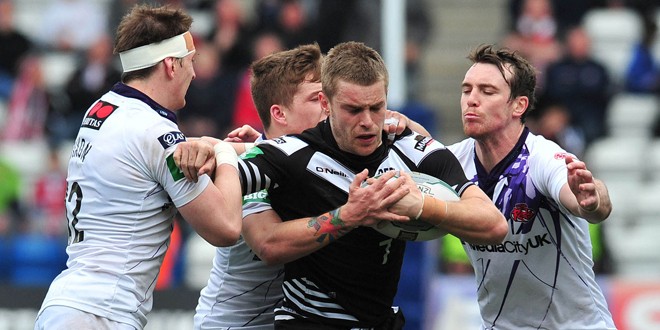 In a Nutshell
The Vikings dominated the final 20 minutes to establish their dominance over the Red Devils and maintain their unbeaten record.

How it Unfolded
Widnes Vikings pulled level at the top of the Super League table with another impressive performance to defeat Salford Red Devils 32-18 in a home thriller tonight.
And in a seesawing encounter it was three tries in the final quarter of the game, when the Vikings scored 18 points without reply, that swung it for Denis Betts’ team. Two of those tries came from Kevin Brown, returning from injury. The Vikings’ stand-off scored the final two tries after Rhys Hanbury had put Widnes in front for the third time with a 61st minute touchdown.
Earlier Chris Dean had opened the scoring for the Vkings after 14 minutes, and for much of the first half the Vikings were on top of their opponents, who were missing star men Rangi Chase and Gareth Hock.
But the game changed as it neared half-t9me, with Red Devils’ winger Greg Johnson scoring an outstanding individual try from within his own half, and that was followed by a second try shortly afterwards by Tommy Lee. Both tries were goaled by Jake Mullaney, although Danny Tickle added a penalty on the hooter for the Vikings to go in 8-12 at half-time.
In the second half Joe Mellor put the Vikings ahead again, but Theo Fages replied on 56 minutes to give the Red Devils a four-point lead again. But as the game went into the final quarter Hanbury struck, and the Vikings were able to confirm their superiority in what had been a thrilling game played in front of 5,291 spectators.