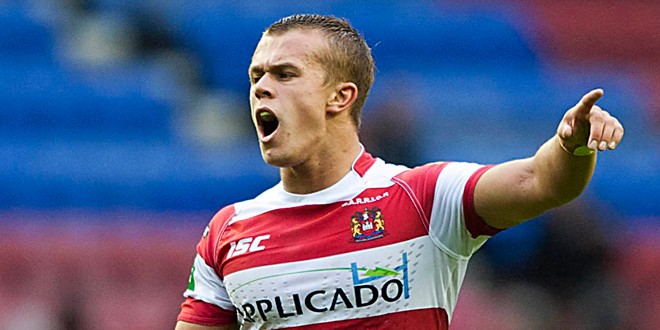 Wigan Warriors coach Shaun Wane has confirmed that he will go with youngster Lewis Tierney as his first choice full-back whilst Sam Tomkins is out injured.

The Warriors confirmed last week that Tomkins would be out until Easter after being forced to undergo knee surgery, following the issue which ruled him out of England contention this year.

And Wane told League Express that despite Ryan Hampshire – who has now gone out on loan to Castleford – and Dan Sarginson both able to fill in, it will be Tierney who gets the nod at the back.

“I’m going to give Lewis a chance,” he said.

“He’s earned it and he’s been very patient all the way through. He’s never moaned about not playing and I really rate him as a player.

“I’m looking forward to seeing him play at full-back for us. I’m not too down about Sam’s injury; it’s one of them things and you can’t dwell on it.

“I’m excited to work with him for the first eight or nine weeks of the year. He’s a real talent and he’ll fit in with what we’re trying to do and our culture. I’m excited to give him a chance and show what he can do in the gap.”

Wane said he never had any doubt in his mind about allowing Hampshire to join the Tigers on a season-long loan, saying it is what the youngster needs for his career to kick on.

“I never considered not letting Ryan go; he needs a change of scenery and to see how he’ll go at Castleford.

“I couldn’t guarantee him a place; Lewis Tierney has been very patient and Dan Sarginson can play full-back too, so even for the period Sam is out it suited us for Ryan to move to Cas.”

Wane was quick to jump to the defence of young half-back George Williams, who has attracted criticism during his time with England this autumn.

“I was hoping Steve (McNamara) might jump in and help him a bit because he’s only a young kid whereas the other half is a senior NRL player,” he said.

“He got some unfair criticism; it wasn’t his best game granted but I thought he did a good job in the first half and he’ll do a great job for years to come. Some of the comments that have been made to me were unbelievable if I’m being honest.”

Wane also confirmed that Sarginson may miss their opening friendly of 2016, but he – as well as the rest of his squad – will be fit for the start of the season, Tomkins aside.

“He might miss the first friendly but he’ll be ready for the start of the season. Everyone’s good and hopefully the England lads come through alright.”