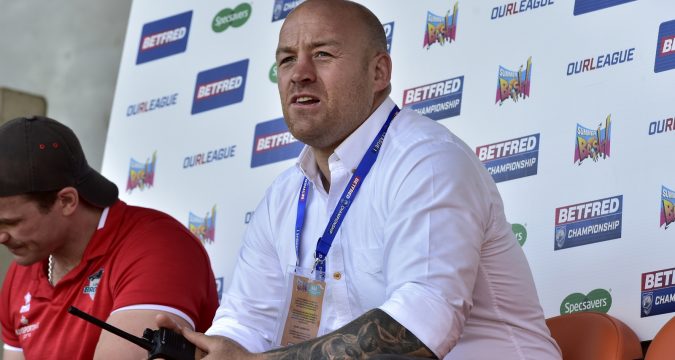 Danny Ward expressed his pride after London proved their doubters wrong by booking their place in the Qualifiers.

A 72-6 victory over Barrow not only secured their place in the four but also ensured second place, granting the Broncos an extra home game.

The departure of Andrew Henderson plus the exits of Andy Ackers and William Barthau left some fearing the waste for the Broncos, but with a third successive spot in the Qualifiers achieved, Ward couldn’t be prouder.

“I’m so proud of what they’ve achieved so far this year in a Championship that’s probably been more competitive than it ever has been,” he told BBC Radio London.

“We’ve tried not to worry about what other people have said about us but you can’t hide away from the fact people knocked us at the start of the year. It’s always nice to prove some doubters wrong and the boys are capable of doing whatever they want to achieve. It’s down to them blokes and they have that belief and hopefully confidence to go into those middle 8s.”

Now, Ward is hoping for more, with a Super League return in his sights.

“It would be great, that’s the dream to get into Super League.

“But there are seven other teams in there who are absolute quality. It’s going to be tough week in week out. Hopefully this last month where we’ve had to play Toronto, Toulouse, Halifax and Featherstone and then go to Barrow, we’ve had to have that intensity week in week out which is what we need. So the boys are ready for it, they know what’s coming, they’ve been here before and that gives us the best possible chance.

“Four weeks ago we were looking down the barrel of not making it. They’re full of confidence, they’re playing well but the quality of opposition is going to go up now.”