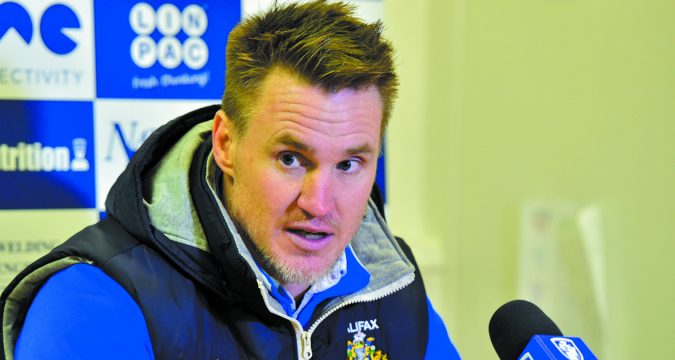 He’s guided his side to another unlikely top four finish but Richard Marshall is not ruling out Halifax causing more shocks in the Qualifiers.

Fax beat Rochdale 38-6 on Sunday to secure their place in the Qualifiers for a third time in four years, and give themselves a crack at reaching Super League once.

They’ll be the only part-time side in the middles 8s alongside powerhouses such as Leeds, and will inevitably be seen as no-hopers once again.

Fax failed to win a game in the Qualifiers last year, but Marshall believes they’re in a better position to compete this term, and after already defying the odds in the regular season, he believes they can do it again.

“It will be very, very tough.

“Not impossible, not insurmountable, but very, very tough. Last year we carried a lot of injuries into the eights so this year I think we’re in a stronger position to challenge. If that’s enough, we’ll just have to wait and see.

“It’s fantastic for everybody involved with the club, the supporters, the players, the volunteers, the couple of employees we’ve got. It’s magnificent and a great achievement to finish in the top four this year in particular than any other.”

Despite their surprise inclusion in the Qualifiers in previous years, Marshall believes the emergence of Toronto and Leigh’s return to the Championship makes their latest top four finish the best of the lot.

“The previous year we took a pay cut and there was a bit of an incentive there financially to get that money back and that was a bit of a drive,” he said.

“But this year there was none of that. In life you get what you deserve and I think we deserve to be in the top four, whether we deserve to go on and push some of the Super League teams we’ll have to wait and see.

“It’s about hard work and the culture and environment we’re in. The players have created a team first mentality whereby the team is always first. Our team spirit has been fantastic and has got us through I reckon in the games we probably shouldn’t have won and the games we were destined to win.”