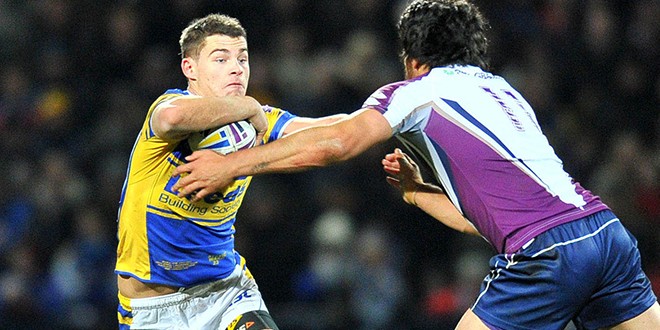 After initially hoping to be back in time for the play-offs, further nerve damage in the joint meant Ward made only eleven appearances in 2013, the year he had hoped to establish himself in after a great start to his career the previous year.

Now with a return in sight, the 20 year-old is hoping to quickly reclaim some of that form.

“I am back in training and although I have not done any contact yet it’s feeling really good.

“There might be a chance I can play on Boxing Day, but we’re taking things steady and we’ll see how the shoulder reacts to some contact in the next couple of weeks before we make a decision.

“2012 was probably the best year of my life, so it was frustrating I didn’t really get the chance to build on it. I am chomping at the bit to play again, earn my spot back and get back on the field.”

While on the sidelines, Ward has turned his hand to music production, putting together a Leeds Rhinos CD entitled ‘South Stand Music’. The CD includes a mixture of fans’ chants, player performances and new music.

The second-rower has had a hands-on involvement in the project and hopes plenty of Rhinos fans will enjoy the final product.

“My friend Dom Smith is studying music production at St Johns University in York and brought up the idea of making something out of the great crowd we have at Leeds to put it all on an album,” explained Ward.

“We spent about eight hours miking up the South Stand to record the crowd on match days and also had about 40 fans in the studio recording chants. We then decided to add players’ chants to the album and we even have players singing. Rob Burrow, Ryan Hall and I do a version of ‘Free Love Freeway’ from Ricky Gervais’ ‘The Office’ and there is Lionel Richie-Moore doing a cover of ‘Hello’.

“There is also a brand new Ronnie Rhino song, so hopefully the kids will like it too. Nothing like it has ever been done before.

“I have seen the mock-up of the finished product and have been listening to the CD in the car. It’s all looking good.

“It’s the perfect CD for a Rhinos fan to listen to on the way to and from matches with a bit of fun and laughter on it from the lads as well.”

South Stand Music is out today (Tuesday) and will be available at the Rhinos club shop and online, costing £5.99.

Ward will be in the Rhinos shop on Thursday (December 12) between 6pm and 8pm signing copies of the CD.