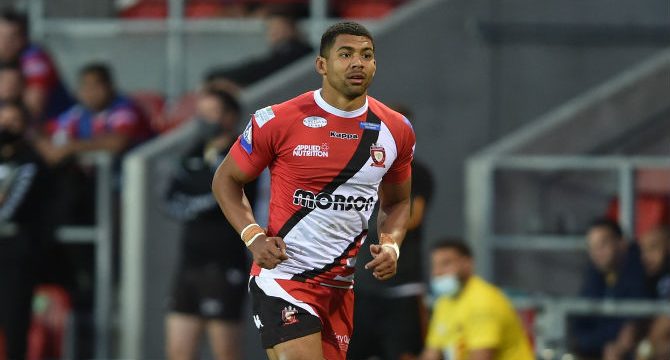 Sidelined Salford skipper Kallum Watkins has spoken about a battle with mental health problems which left him planning suicide.

Amid fears the England centre could be out for several months with a knee injury, he talked to the Out of Your League podcast about a personal crisis two years ago.

Watkins, who was still playing for Leeds before a move to Gold Coast Titans, explained: “I wasn’t playing well, I came back from injury too early and I was at breaking point.

“When we played at home against Wakefield and I was playing against Bill Tupou, I missed about seven tackles on him – he just ran over the top of me.

“I had the worst game ever defensively and I was gone at that point – my head was gone and that weekend I planned my suicide.

“What I was going through in my marriage, it was breaking down and I thought there was nothing left for me.”

Watkins says his children made him change his mind.

“My kids that weekend really got involved with me. I looked at myself and said I’m never going to be in this situation thinking about ending my life again,” he added.

“The kids wouldn’t have been with their dad and it’s something that I’ve kept hold of for a while, but I feel it’s important to help people.”

The 30-year-old former Leeds skipper cut short his spell in the NRL in April 2020 to be with his ill father.

Watkins then signed for Toronto, but was left in limbo when the club withdrew from the remainder of the Super League season last July.

He joined Salford in October, and played eight times for them last season, including the Challenge Cup final defeat by Leeds at Wembley.

Watkins picked up his current injury during the Red Devils’ most recent game, the 62-18 home defeat by Warrington.

With his fellow centre Harvey Livett out with a hamstring injury and uncertainty over Krisnan Inu’s future at the club, Salford have been linked with ex-St Helens, Warrington and Toronto player Gary Wheeler.

The 31-year-old made two appearance for the Wolfpack last season.