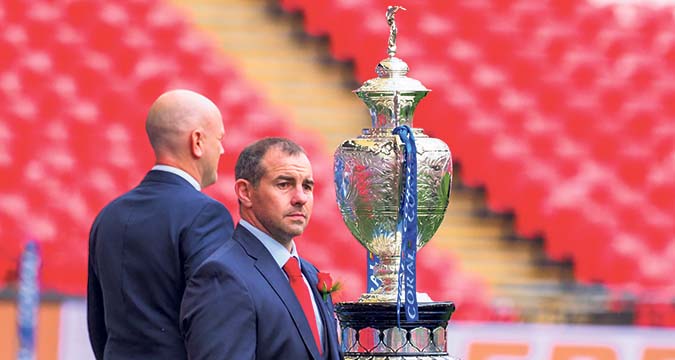 Ian Watson has barely got his feet under the table at Huddersfield but he has already overseen substantial changes.

48 days into his reign he has made five eye-catching signings, as well as moving on four players he inherited.

It’s been a hectic bedding-in period for the new Giants chief, but a period he believes was absolutely crucial for the club’s aspirations in 2021.

“We came in late but we didn’t want to wait twelve months to start recruiting the team we wanted,” Watson said.

“So we had to make some really tough calls and tell some guys we didn’t see them fitting in. While that’s tough to do, it’s nothing personal, it’s business and it’s rugby and based on my opinion on how the team wants to play.

“All the guys that have gone, I’ve not dealt with them too many times and they seemed like good guys. But you want to make sure you’ve got the players you want to do the job for the team; it always has to be what’s best for the team.”

In recruiting Josh Jones, Ricky Leutele, Jack Cogger, Luke Yates and Joe Greenwood, Watson believes he has added the quality and the depth he was looking for. What comes with that is an internal competition for a place in the team, a culture he intends to build within the confines of the club.

“Huddersfield already have a load of quality players like Aidan Sezer, Leroy Cudjoe, Joe Wardle and Jermaine McGillvary. But it was about adding more quality internationals like Jones, Greenwood and Leutele. Doing that adds more accountability for your actions day to day and game to game.

“You always want to guard against players believing they’re guaranteed a place in the team, but the only way you can do that is by having genuine competition.

“The players seem driven and want to win things, but you have to push them to see if they want to go to that level through the choices they make.

“Take Lee Gaskell. He might have been in that place, where he knew he was always going to play, but now with Jack (Cogger) and Aidan there are no guarantees and that’s what we want. Gaskell is dangerous just on his own merits, but he needs challenging. It’s a squad that wins you things, not the 17 that go out in round one.”

Watson believes the Giants’ recruitment for the season is now complete, though he wouldn’t go as far as ruling out further business,

“When we first came in, if you’d said we’d have the players we’ve got now, I’d have snapped your hand off,” he said.

“You’re always greedy; you want another one and if something comes up and we can move, that would be great, but right now I’m happy with what we’ve got in.

“The key one was bringing quality and really challenging people to be better and I think we’ve managed to do that.”