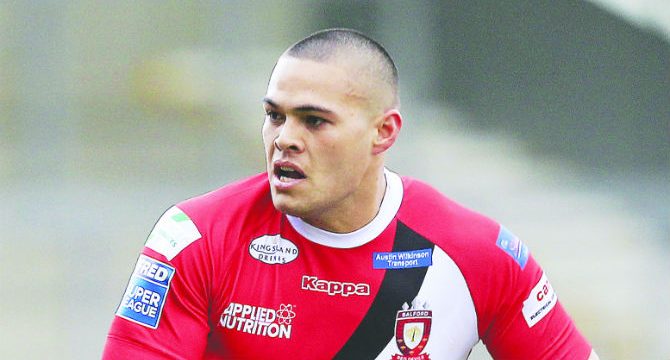 Huddersfield want to bring Salford stand-off Tui Lolohea to the John Smith’s Stadium next year. The Tonga and former New Zealand international, who joined the Red Devils from Leeds midway through the 2019 campaign, is off-contract at the end of this season. League Express understands the Giants are very keen to sign the former New Zealand Warriors and Wests Tigers man.

Coach Ian Watson confirmed his club, who along with Catalans are also being linked with St Helens halfback Theo Fages, are interested.

“I like Tui, so definitely have an interest and will hopefully talk to him soon,” he said.

It is believed off-contract Australian Aidan Sezer will return to the NRL at the end of this year and Huddersfield see Lolohea as an ideal replacement. Watson, of course, coached him for a year and a half at Salford and had great success with the 26-year-old. The Red Devils reached the Grand Final in 2019 and the Challenge Cup final last year with the New Zealander at stand-off.

Watson, who joined Huddersfield late last year, has already brought in former Salford forwards Luke Yates and Josh Jones, along with ex-Red Devils conditioner Greg Brown. Lolohea struggled at Leeds but has been a solid contributor at the AJ Bell Stadium.

This season he has scored one try and has one assist. He is averaging 4.6 tackle busts, 22.8 tackles, 55.4 metres and 4.6 attacking kicks per game. The Auckland-born player has one cap for New Zealand and has played 12 Tests for the Mate Ma’a.

Both the Giants and Catalans are among a posse of clubs reportedly chasing Fages, who like Lolohea, is coming out of contract.

The 26-year-old, who skippered France at the 2017 World Cup and to success in the 2018 European Championships, has already helped Saints to two victories over the Giants this year.

The former Salford man scored a try in the 18-10 Super League win and kicked a field-goal in the 23-18 Challenge Cup quarter-final triumph.

Now Watson, who worked with Fages at the Red Devils, where he arrived as a 16-year-old and went on to make more than 60 appearances, wants to bring him in next season.

Predominantly a scrum-half but also comfortable at stand-off or hooker, he has been a big hit at Saints, who signed him for the 2016 season. Fages’ flourishing partnership with Jonny Lomax has helped his club win the last two Grand Finals.

The double-chasers are keen to keep hold of him, but face plenty of competition.

Saints coach Kristian Woolf said: “Sometimes there are other things at play when it comes to contracts and we are in a salary-capped sport as well.

“Salary cap is designed to squeeze strong players out of teams, that is essentially what it is there to do and make them go to other teams.

“That is not specifically related to Theo, but what it does mean is that we are going to lose some players due to the salary cap.”

Watson arrived at the Giants in November with the stated aim of turning them into trophy challengers.

It’s been a slow start, but Huddersfield head into their Super League clash at Warrington tonight (Monday) aiming to make it successive league wins after a 14-13 home success against Leeds.

Forward Jon Luke Kirby, 22, has been loaned to Dewsbury for an initial two-week period.