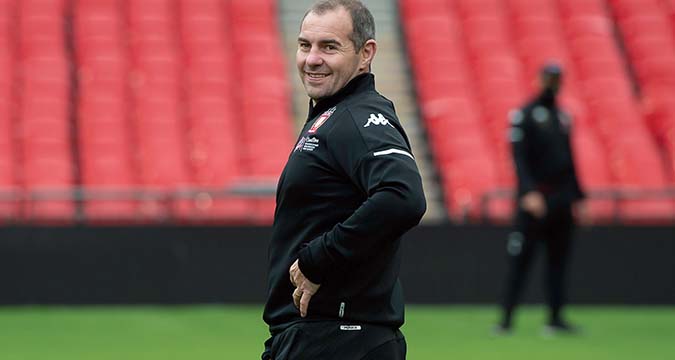 He’s been branded a ‘snake’ and a ‘traitor’ by some angry Salford fans, but Huddersfield coach Ian Watson is not bothered by criticism of his move to the Giants.

Watson swapped the Red Devils for Super League rivals Huddersfield in November last year, agreeing to a three-year deal, and has since signed both prop Luke Yates and conditioner Greg Brown from his former club.

The switch and signings have prompted a fiery response from the club’s fanbase online, but the former Salford favourite says he is not worried at all by the stick.

“I’m not on social media, so I’m bothered about it,” said Watson.

“Everyone chooses their own path and has their own choices to make and I made mine, which I’m happy with. I learnt pretty early not to let my ego to get in front of me by reading stuff in the paper, whether it’s good or bad.

“It doesn’t impact on what I’m going to do or what I’m going to achieve. They’re my own choices and I’ll do what I think is best for me. People will have their own opinions and my decision was to go to Huddersfield. I’m happy with that.”

Born and raised in Salford, Watson spent several seasons playing for the Red Devils and then the past six at the AJ Bell Stadium in assistant and head-coaching roles.

The 44-year-old is expecting some stick when the Giants face Salford away from home for the first time this season in Super League, but he remains unconcerned.

“It will probably be a little bit of fun,” he said.

“I’ve had it as a player when I left a club and went back to another club and got a bit to stick.

“But I don’t read too much into it and I don’t worry about it. My job’s to coach now and that’s all I’m focusing on, helping Huddersfield to do really well.”

The Giants have resumed pre-season training after having to briefly shut down their training facility at the end of January after an outbreak of positive Covid-19 tests.

“We obviously had to shut down for a few days because of Covid creeping in, but we’ve managed to do really well. We’ve been back underway for the last couple of weeks.

Watson admits his transition to Huddersfield has been seamless so far.

“The people at the club have made it really easy,” he said.

“It’s a really well-run organisation; everyone has their role and knows what it is. Andy Kelly’s been great. They’ve got people in positions to get the job done. At Salford our assistant strength and conditioner was doing the kit, whereas here there’s a kit man who can crack on and do that job, so I can’t complain one little bit. The facility is excellent, the squad is a good one and we’re putting a plan in place to ensure we’re really effective as a team going forward.”