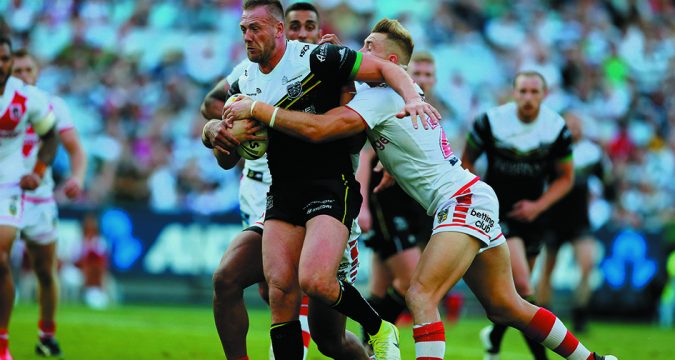 The prop faces another ban after being sent off for head-butting Warrington’s Dom Crosby 73 minutes into Friday’s Super League clash at the KCOM Stadium, which Hull won 21-12.

Coach Lee Radford said he had no sympathy for his player, adding: “It was a pathetic effort. He’s going to miss a lot of games and deserves it.”

It was a fourth dismissal in just eleven months for Watts, who was ruled out of six games though suspension last season.

Many, including Studd, reckon the 27-year-old’s disciplinary record is the main reason he has been overlooked by England coach Wayne Bennett.

Watts, who is 6ft 4in tall and weighs 17st, insisted it wasn’t a headbutt and said via social media that he was “merely caressing Dom’s forehead with mine in a friendly manner” after being upset by a Crosby tackle moments earlier.

However, he apologised to Hull fans and explained he “lost his head in the heat of the moment”, adding: “People that know me know that it’s not in my nature to react like that.

“I’d just like to apologise to all the kids that saw it and that’s how not to act on a rugby pitch when things flare up.

“Very unsportsmanlike and very disappointed in myself. I’ll learn from this for the better.”

Watts then posted on his Twitter account: “Also when people get paid to publicly humiliate players who give their all every week to this game and put their bodies on the line week in week out is wrong!

“So easy to criticise from behind a phone or camera lense. Madness.”

Studd responded: “It’s not a humiliation Liam, it’s a criticism of on field actions which players sometimes wrongly misinterpret as character assassinations.

“I’m not slaughtering you as a human being. I don’t know you at all.”

Watts then wrote: “I’m fine with you criticising what I did but then don’t bang on about that being the reason for me not getting picked (by England). There’s a lot of very good players ahead of me.”

“His own view is that other props are better. My view (please bear in mind I’ve never played) is that he’s an outstanding player who would be a major asset to England but for his recent poor disciplinary record.”

A year ago, Watts was hit by a four-match ban for a dangerous tackle on Catalans’ Jason Baitieri (he was not sent off on that occasion).

In September, former Hull KR man Watts was controversially sent off after catching Michael McIlorum with an elbow as the Wigan man tackled him. No suspension was imposed.