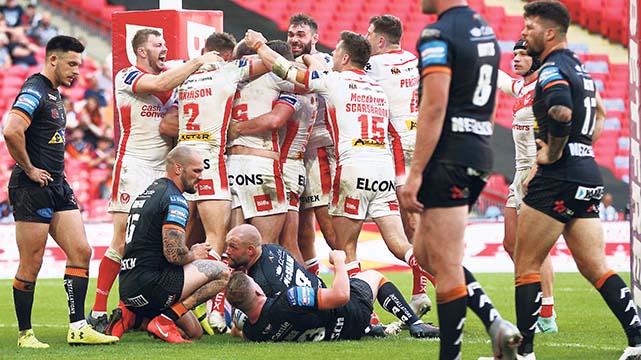 In a game of high intensity played in hot, sunny conditions, St Helens recovered from a 12-6 half-time deficit to score 20 unanswered points after the break to take the trophy with a 26-12 scoreline in front of more than 40,000 spectators.

Earlier, Featherstone Rovers had won the AB Sundecks 1895 Cup with a 41-34 victory over York City Knights in another thrilling encounter.

And for the RFL Chairman it was a truly memorable occasion.

“And I’m very grateful that the Challenge Cup Final was one of the events covered by the government’s Event Research Programme. If it hadn’t been for that, we would only have been able to have around 20,000 fans at Wembley.

“It was wonderful weather, and I know I say this every year, but it is quite a contrast with other sports, to see Wembley taken over by families wearing Rugby League shirts, mixing together with no trouble, creating a carnival atmosphere both inside and outside the stadium.

“It makes me proud to hold my position.”

Johnson was reluctant, however, to draw too many contrasts with the events at the Euro2020 final the previous Sunday, when there was a significant amount of trouble, both within and outside the stadium, as supporters were able to gain admission to the stadium without having tickets.

“I don’t really mix with many of the operational team so I wasn’t really in a position to make that sort of comparison,” said Johnson.

“But I was chatting to stewards on the way in and out and they were enjoying it. They were very good humoured and they commented that we created a lovely atmosphere.

“I have a massive privilege of walking out behind the teams and introducing the chief guest and singing the national anthem. The stadium was dressed superbly with the flares, the lights, the streamers and the players ready for action.

“I think we put on a good show.

“Those who watched it on TV saw two great games and the BBC’s coverage was excellent for both games.

“The BBC gave great support, as they always do. It was great to see them interview Jon Dutton, Jodie Cunningham and James Simpson to let the viewers know about the three World Cups this autumn.

“We welcomed the Sports Minister as the chief guest and we also welcomed (Labour leader) Sir Keir Starmer, as well as the MPs Yvette Cooper and Connor McGinn, the MPs for Castleford and St Helens respectively, as well as Judith Cummins, the Chair of the All Party Parliamentary Rugby League Group. Nigel Huddleston (Sports Minister) was at his first live Rugby League match. He sat between Ralph Rimmer and I and we explained everything to him and he very clearly genuinely enjoyed the game and is looking forward to the World Cup.

“Keir Starmer was at his first Rugby League match and he was also at the Euro Final, where he did witness some of the trouble. But he had a lovely long chat with James Simpson as we told him about Wheelchair Rugby League and we hope he will support it as part of the World Cup.

“I think it’s really good to give people the opportunity to see Rugby League for the first time.”

Johnson also paid tribute to Featherstone and York supporters for their part in a successful event.

“The Featherstone flat-cappers were a great presence in the stadium, and together with the York fans they created a great atmosphere that grew as the first game went on and more fans came into the ground.

“And at the Cenotaph on Friday I met six Castleford fans and had a lovely long chat with them.

“The final itself was a genuine game of two halves. Castleford played so well in the first half but couldn’t hold on.

“Big occasions need big players to do big things James Roby and Tommy Makinson both fit that description and both of them did great things. Tommy’s try was absolutely superb.

“The Championship is a hidden gem within our game.

“And there are some great stories and great matches yet to come.”