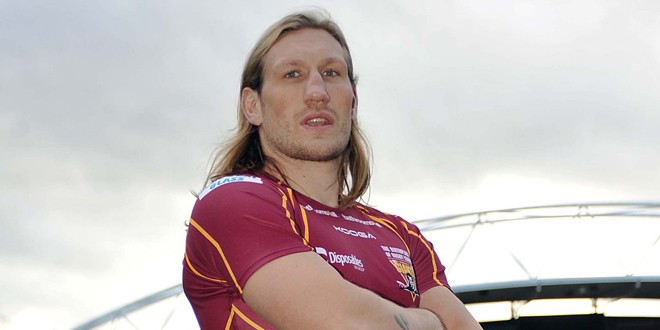 Monday
“It’s an unusual week because we’ve just been to Catalan, so our training schedule is completely changed from normal and we’ve got Monday and Tuesday off. I had about three loads of kit washing to do – we’re not like footballers, we have to do our own – and then I went to the shooting range and shot a few clays.
“After that I took my daughter with me into Leeds for filming of The Super League Show. It was Matty Smith’s first go and he was really good.
“There’s a few of us that do quite a bit of media work. I once turned down Boots ‘n All, probably when I was about 20 or so, just because I was afraid and didn’t dare do it, but I grew up after that and promised myself I’d never turn anything down.
“Later on I got the opportunity to work with James Deighton on BBC Radio Leeds, he looked after me and I absolutely loved it, and it’s gone from there. It’s pretty important to get more Super League players in the sport’s media because not many understand what’s going on in the way we do. We see some of the stuff that’s produced and it’s embarrassing really when you’ve got the knowledge we have.
“I’ve been really lucky in lots of ways, and the media work has shown me plenty of cool stuff. When we were filming during the World Cup we were using the Match Of The Day studios, and one night Martin Keown and Alan Shearer were walking out as we were walking in. That’s all a bit surreal.”

Tuesday
“For some reason the travel back from Catalan has really knocked me for six, so it’s good to get another bit of time to myself and make the most of it. I don’t normally get like that, but I was full of cold, tired and jaded, so I went out, got a coffee and a bit of food, then went to the shops and just chilled out on the couch. At times I think rest is just as important as training and today was definitely one of those days.” Wednesday
“In contrast to yesterday, today was the longest day ever – it felt like a pre-season day. We were back at training, which started with a massage at 7.30am followed by a forwards’ video review of the Catalans game. That was pretty tasty and some home truths were told, but it ended up being a really positive session because we learned quite a bit.
“After that we had a flexibility session, then went down to the field for a skills session. When that was done it was a case of getting into the ice baths, then some weights and then a bit of wrestling.
“At this stage of the year my training is just about ticking over and maintaining my levels, so I’m doing weights at lower reps with bigger weights in order to maintain power, then trying to maintain my fitness as well.
“All the training is done on an individual basis though – for example, I can’t do the same weights as everybody else because I’ve had three operations on one elbow and two on the same shoulder, so the exercises I do have to be modified.
“After all that most of the lads were done for the day, but I had some filming to do at the stadium as part of the club’s Heritage Day, and then headed up to do an opening at a bistro in Linthwaite.
“I’m inundated with requests for appearances and unfortunately I just don’t have time to do them all, because I hate turning them down, but sometimes I feel like I’m busier doing other things than actually playing rugby.”

Thursday
“Today it’s another day off, but it is really unusual for us to have so many days off. We normally have two days off like everybody else, maybe Tuesday and Thursday. They’re strange days to have and there’s not much you can do, so you make the most of it.
“Today I’ve got a shooting lesson booked in; I’m heading over to Glossop at 11am to meet a mate of mine over there and he’s going to give me a few pointers. I’ve really got into it (shooting) recently. It was a sport I always fancied a crack at, but I felt like I couldn’t do it because I wasn’t in the circle. It’s one of those sports that you know exists, but don’t know anything about it.
“But then by chance I got asked along and got hooked instantly. I hit a few clays on my first go but wasn’t particularly good, but I’d got the bug then. I applied for a shotgun licence, got a gun safe and now I go pretty much every week. The first time I went I hit 12 out of 50 clays, and now I’m up at about 35 most times. My best is 38, but I’m determined to break 40.” Friday
“This is a more regular day, with a video session first to go through the gameplan for our match against Warrington, then a flexibility session, then skills, weights and a team lunch at the stadium.
“It’s a shorter day overall, but the field session is a bit longer and then we get some time together as a squad with the lunch. It’s put on by the club, but it’s the only time really where they fix our food up.
“Over time I’ve found what works for me in terms of food, and I stay away from pasta and bread because it just makes me fell bloated. I’ve had nutritionists say I can eat it, but I feel better when I don’t. I’m very protein-based, eating lots of meat and veg. But while I try to stay away from carbs as much as possible, having things like turkey and stir-fried veg, someone else will tell you something completely different. It’s all about what works for you.”

Saturday
“The day before a game always involves the ‘captain’s run’. We’ll start in the gym and do another flexibility session, then head to the field, warm up (with even more stretches!) and then the session itself will be about an hour or so.
“On top of that is the usual filling in of some wellness information, where we answer some questions on our phones about how we feel, how we slept, whether we’re sore or not. If you forget to fill them in then you get fined, so everyone’s got about 10 alarms set to make sure you don’t forget.”

Sunday
“Today it’s my 350th Huddersfield game, but I’ve learned over the years not to get too excited by it all. I try not to think about the match too much beforehand. I’ve a little book where I write a few things in that I need to work, but that’s enough for me – probably because I’ve been doing it for so long.
“In the morning I’ll enjoy the fact it’s a lie in, then chill out, have some breakfast (although I’ve no superstitions about pre-match meals or anything), and then head down to the ground.
“I start to feel the soreness straight after the game, but then it gets worse and worse for a while. It’s called DOMS – Delayed Onset Muscle Soreness – and two days after a game is when I’m worst, so Tuesday will be fun…”

This feature originally appeared in the May 2014 issue of Rugby League World magazine. Find out more about the UK’s biggest-selling Rugby League monthly by clicking here.