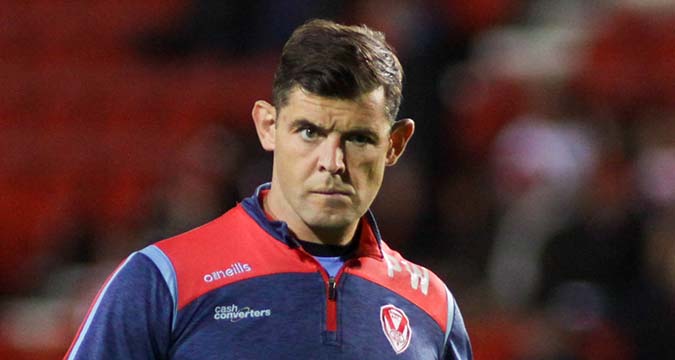 Paul Wellens is one of just three players who have won the three most prestigious individual awards in Rugby League – the Lance Todd Trophy, the Harry Sunderland Trophy and the Steve Prescott Man of Steel award.

Wellens won both of the latter two awards in 2006, when St Helens swept the board in terms of major trophies, while he shared the Lance Todd Trophy with Bradford’s Leon Pryce in 2007, winning it for a second time, this time without having to share it, in 2008, when St Helens defeated Hull FC 28-16, which was the last time the club won the Challenge Cup.

Wellens’ playing career came to an end in 2015, since when he joined the coaching ranks at the club and has worked as an assistant coach to previous head coach Justin Holbrook and to current incumbent Kristian Woolf.

Earlier this week, St Helens were hit with the news that their Australian star Sione Mata’utia, who had been looking forward to playing against his brother Peter on Saturday, would miss the game after being suspended for one match for a high tackle in last Friday night’s game against Wakefield Trinity.

Wellens admits that everyone at the club was saddened by the decision, but that they have all now put the matter behind them.

“We are extremely disappointed for Sione,” said Wellens.

“He has been an integral part of the team. We did all we could as a club to try and get that charge downgraded, but it wasn’t seen in the same light as we saw it. But that’s done now and we have to deal with it. Within professional sport you just have to deal with things as they arise. It is a difficult one, extremely unfortunate, given that there were a fair few areas around the challenge. But the RFL disciplinary has a procedure that they have to follow and we respect it.”

And Wellens denies that the RFL decision on Mata’utia will give St Helens extra motivation to win at Wembley tomorrow.

“You don’t need any extra motivation in Cup Finals. Sione will be there, cheering us on, and if we win nobody will be happier than he will be.”

Saturday’s game will be the first ever Challenge Cup Final to have been played in July, at virtually the mid-point of the season. Has that made any difference to the way the team has prepared for the game, especially given the hot conditions that are likely to prevail tomorrow?

“I don’t think it makes any difference,” insists Wellens.

“It’s certainly different to have the game in July, but it doesn’t take away from the excitement. But they are still very special and I understand the emotions the guys will be going through in the lead-up to the game.

“I used to be a fan of the Challenge Cup Final being in April and May when I grew up watching it as a child. It does benefit, I suppose, in being a bit further away from the end of season play-offs. Having the Cup Final a little earlier helps give it the space it deserves.”

Of course the fans of other clubs, as well as the pundits, are only too keen to remind St Helens that they haven’t won the Challenge Cup since beating Hull FC 28-16 in 2008, while they were beaten by Warrington Wolves on their last visit to Wembley in 2019.

Have Saints learned anything from that last disappointment?

“But psychologically you learn a lot from those experiences. If you are prepared to reflect honestly and learn from them, then down the track they will become beneficial experiences for you. We have always learned from defeats and bounced back well. This team owns its performances and doesn’t look for external factors to blame.

“Any lessons have already been drawn on. I’m not sure how many players carry baggage with them. They way the guys responded in 2019 shows the strength in the group and it shows the way we can overcome adversity.

“We have some very good players and if we perform to our ability I’m sure we will do very well.

“The guys are pretty relaxed, and they have been like that all week. It’s important to be relaxed when you’re approaching a game like this. We have been involved in big games over recent years, so we understand what they are all about.

“We’re fortunate to have a lot of players with big-game experience, the likes of James Roby, Jonny Lomax and Lachlan Coote especially. I am happy to give any advice I can about the big day itself, but I think the players are well taken care of.

“You want to start well in a final, but ultimately any game goes for 80 minutes. The final five minutes are as important as the first five minutes.

“It’s an opportunity to win something they haven’t had the chance to win before.”

And Wellens is delighted that, in contrast to last year’s Grand Final, there will be around 45,000 supporters in the ground for tomorrow’s game.

“You could see the lift the fans gave our players when they first came back into our stadium earlier this year. And now you can only imagine the excitement our players will be feeling to be playing in front of 45,000 at Wembley.

“Our opposition like to throw the ball around and play good rugby. We don’t know what to expect, but we will just prepare as well as we can. It will be very challenging for both teams.”

And Wellens admits to a feeling of relief that the St Helens squad has got through the week without any Covid alarms.

“There is a bit of relief,” he admits.

“We have become used as a group staff and players, over the past 12 to 18 months, to living a different lifestyle, not going out as much and doing everything we can to put ourselves in the best position possible. I can’t speak highly enough of our players and the sacrifices they have made. In some respects this new lifestyle has now become normality for us.”

After the trouble that was reported at the Euro Nations Final last Sunday night, when some supporters without tickets forced their way into the stadium and caused significant amounts of trouble, Wellens is confident that Rugby League supporters will show their true colours on Saturday.

“I don’t envisage any trouble at all,” he says.

“Rugby League people support their team. Look at a Magic Weekend when fans from all clubs mix openly. Football fans can’t understand how supporters from rival clubs mix together so well.

“One team has to win and one team will lose. In terms of our supporters, whether we win or lose, they will go away and certainly won’t cause any trouble.

“The support our fans have given us has been phenomenal, many of them have sacrificed their own hard-earned money, so hopefully we can reward them with a win.”