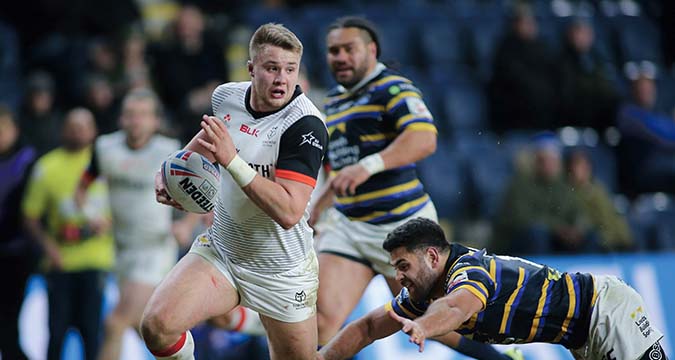 Salford Red Devils’ new signing Jack Wells could be forgiven for thinking he has been cursed over the past couple of years.

The second-rower has been put through the ringer by injury on several occasions.

In September his long stint at Wigan ended with a medial ligament injury and dislocated kneecaps suffered in a match against St Helens.

Wells missed the whole 2018 season with a broken foot, not playing a single game, and then he struggled for regular game-time during 2019.

But now the 23-year-old is out for a fresh start at his new club and is keen to put his injury hell in the rear-view mirror.

“I’m all good at the moment,” Wells said.

“Last year I did my medial against St Helens and that kind of got me down a bit. I was just questioning myself, saying ‘why me, why can’t I get through a season without getting injured’.

“But it’s the nature of the game and you can’t take that away. It happens. It’s a process every player goes through, I suppose, but some are luckier than others.

“It’s just the roll of the dice. That 2018 season was probably the big one where I was feeling down because I didn’t play a single game, I was injured all year.

“Doing rehab on my own every day was difficult but I’ve bounced back from all that now and I’m ready to crack on with the new season and I want to get as many games as I can under my belt.”

Wells debuted for Wigan as a 19-year-old in 2016 and has had loan spells at Swinton and Toronto. But the forward, now 23, feels he has a point to prove in Super League.

“I just want to put myself in the shop window to show everyone what I can do and prove a point that I do belong in Super League,” he said.

“I did enjoy my 2019 season at Swinton, which gave me the opportunity to play after that year of being injured. And I hold them in deep respect.

“But Super League’s obviously a step up and that’s where I want to be, so there are a lot of points to be proved.”

Wells spent a decade with the Warriors, coming through the club’s youth system.

He admits it was difficult to leave Wigan, but is excited to have joined Salford, the club he has supported since childhood.

“I’d been there since I was 13 years old and I came through the scholarship system, the Academy and got the chance to sign for the first team. So it was emotionally tough leaving. It was kind of a surreal feeling, as I’d been there from such a young age and that’s all I’ve known.

“But to be in a different environment tests your character as a person and your development as a player when you’re meeting new people and training with new players. It’s been a great experience and I just can’t wait till the season gets going.

“My whole family’s chuffed with me. I’ve been watching Salford since I was six years old. Signing for them now is an amazing feeling.”