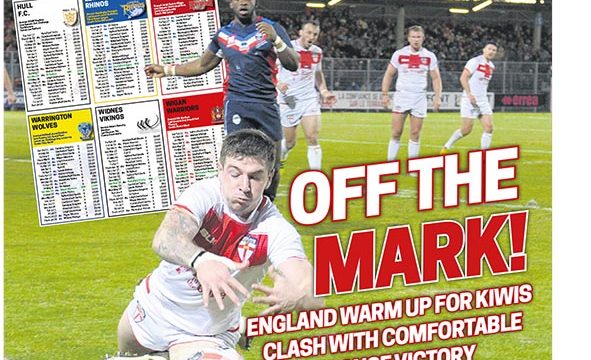 In the new issue of League Express we provide all of the build-up to England’s eagerly-anticpated Four Nations campaign while revealing the 2017 fixtures lists for the Betfred Super League, the Kingstone Press Championship and League 1.

We hand the Albert Goldthorpe Rookie of the Year medal to a rising Wakefield star, Leigh boss Neil Jukes talks of a “daunting start” to life back in the big time and Catalans and Castleford continue to add to their rosters.

Find out where Lee Mossop’s future lies and hear from Andre Savelio, following his move from St Helens to Warrington.

Widnes star Kevin Brown tell us of his England waiting game and Ryan Hall explains his mentoring role, which has helped ease the nerves of Wayne Bennett’s newcomers.

York’s future remains uncertain as they are without fixtures – for now – ahead of next season.

Our columnists Martyn Sadler and Garry Schofield both look ahead to the Four Nations tournament in their own inimitable styles, while Phil Hodgson, our amateur correspondent, keeps an eye on the community game.

In addition, we provide, as usual, full coverage from the world of Rugby League, ranging from Super League right through to the junior game.

To download the digital version of League Express and to read it immediately, go to https://pocketmags.com/league-express-magazine.