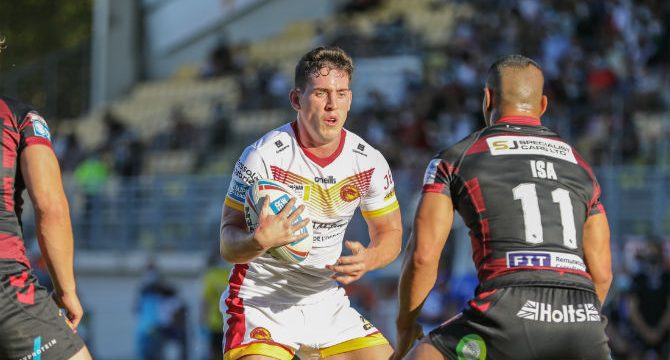 Matt Whitley is planning to take extra French lessons as his career continues to flourish at Catalans Dragons.

The England Knights second-row is coming to the end of his current two-year contract in Perpignan but he’s keen to continue his career in the south of France, to improve his playing skills and also brush up on the language.

“I can see myself staying; I’m enjoying it over here and my family’s enjoying it. I think we’re in a good place.

“It’s a great place to live and the weather and lifestyle are so good. The language is still a bit of a struggle, I can just about ring up a restaurant and book a table, order a pizza, or say hello and greet people, but any more than that is pretty difficult. I’m working on it.”

“The supporters are so passionate and it was so good to get back in front of them last week, I just wish it was a better result for them (Catalans lost at home 12-28 in front of a virus-limited crowd of 5,000).

“We’ve got a run of five games at home coming up soon, so we’re really looking forward to that and hopefully we can put a smile back on their faces.”

Whitley said the Dragons hadn’t dwelt too much on the Wigan defeat, adding: “We’re disappointed, of course, but we’ve dusted ourselves down and we start again in the league against Warrington on Thursday.

“We’re looking to put things straight. We won’t dwell too much on it.”

The 42-year-old Australian was the Dragons’ top-try scorer in a dazzling three-season stint from 2006-08 and, after returning to Australia, he came back to France last year to take up the coaching reins at Toulon Metropole in the Elite Two division.

He has now joined fellow former Aussie Dragon Greg Bird as joint coaches of the Catalans’ reserves, who are the current French champions.

Bird and Murphy have replaced St Estève coach Benoit Albert, who has left the club.