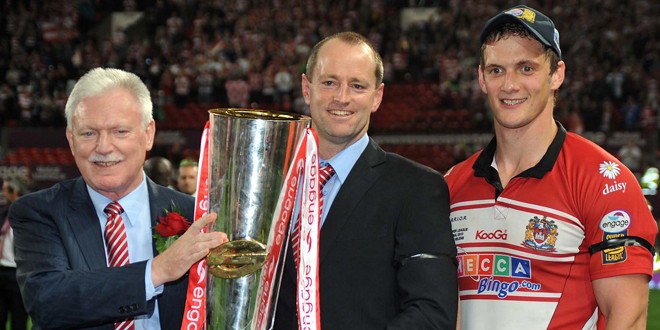 Wigan chairman Ian Lenagan has accepted responsibility for the Warriors’ 2014 season, in which they failed to win any silverware.

“When we look at Wigan as a club and the performance this year, I think the feeling we’ve not achieved what we set out to achieve at the beginning of the season is obvious to me, to the coaches, the players, the fans and I take responsibility for that as chairman,” he said.

“So let us for a while sit in that feeling of non-achievement, feel it hard because it is hard for Wiganers and it is hard when we are used to winning. We’ve won four finals in a row to lose one is very difficult.

“I have to say that we are going to have to lookout as St Helens’ defence was exactly what Shaun has been leading us into for the last three or four years and I think where Warrington have been our major competitors over the last few years, I think St Helens are going to raise their game – particularly with two new half-backs.

“We’ve already improved dramatically over the past five years and will improve even more in my view as far as Wigan is concerned, remember Wigan don’t have a divine right to win trophies. It’s wrong to judge a club on trophies won only, our development project is a long-term project.”