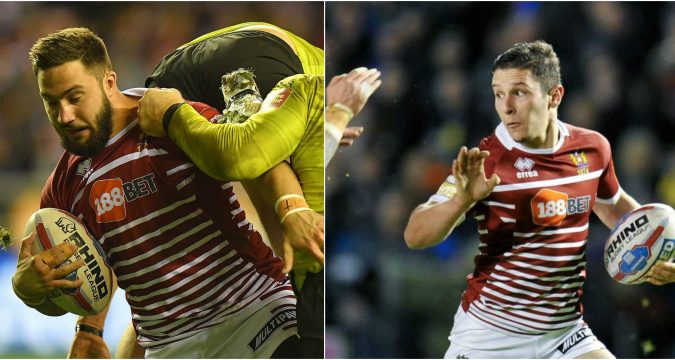 At times last year, home must have felt like a long way away for Morgan Escare and Romain Navarrete.

Both took the plunge together to step out of their comfort zone at Catalans and attempt a new challenge in England with Wigan. It was a brave move from two of French rugby league’s hottest and most promising prospects – and at times, the move more than paid off.

Navarrete forced his way into the Warriors side and played 10 times in the first half of the season. Escare filled in for Sam Tomkins at fullback and did such a good job, the club quickly handed him a new deal to tie him down long-term.

But then, things began to go wrong.

“It was a difficult time of my life, but I couldn’t quit and give up – just go home,” Escare begins, recalling the moment in early May when he knew his season was over after requiring knee surgery.

For his close friend Navarrete, non-rugby matters took priority, as he quickly found himself sent out on loan to Catalans in the second half of the season. He explains: “It was very hard because my sister had a baby, my first nephew. She had the baby during the season and it was difficult for me at that moment so I had to go back to France.”

Navarrete found opportunities limited under the change of regime at Catalans, now coached by Steve McNamara, too. But after a promising World Cup campaign with France, the prop has returned in not just impressive physical condition, but an impressive mindset, too.

“I’m fitter than last year; I’ve lost a lot of kilos and I had a good pre-season in France because Shaun gave me six or seven weeks off after the World Cup,” he says. “That was good for me, I trained really hard and found a conditioner who worked me really hard too. I didn’t play a lot of games for Wigan or Catalans last year but the World Cup has helped me rebuild my confidence.”

He is not the only Frenchman looking to make up for lost time across the Channel too.

Escare explains: “I stayed in Wigan for all my physio; I didn’t want to go home, I wanted to work on my recovery here and focus on a big season with the club in 2018. The fans were fantastic for me, they were always asking me how my knee was on the street and on social media – that helped me to settle in and feel at home, so I want to say thank you to them.”

The duo moved in together to help adjust to life away from family and friends together – though Navarrete has recently found his own place with his girlfriend, who has moved over from France. And living in close proximity does have its fair share of positives, as the pair joked.

“To have another French guy, when we don’t understand what all the other players are saying we can talk in French sometimes!,” Navarrete laughs. Escare agrees: “Romain is a good friend of mine, as are the likes of Theo Fages and Eloi Pelissier. Having those people here helps, and being with Romain is good for both of us. Together, we help each other adjust here. There’s happy times ahead.”

A signal of their intent to stay in England long-term is that both have taken intense English lessons to get used to the language.. though it’s clear that the duo feel some accents are easier to understand than others.

“In Wigan, they all talk very fast!” Escare says. “I’ve been to lessons with Romain and my English is improving. Is it perfect? No but it’s getting better. My father comes every month for one or two weeks too which is nice. The Wigan accent is very.. strange! But I’m getting there with it.”

Navarrete replies: “They have a strong accent in Wigan which is difficult to hear sometimes, but the more you listen, the more you understand it!”

Escare and Navarrete both find themselves in fierce battles to be in Shaun Wane’s side this year – with the former in a head-to-head race with Sam Tomkins for the fullback shirt. It is a fight the young Frenchman knows will be tough – but it is clear he has the utmost respect for the England international.

He says: “My favourite position is fullback and I got to play there while Sam was injured. Now there’s a competition between Sam and me – who knows if I will play, but I will give it everything. Every day I get to train with Sam and he’s fantastic for me, he really helps me. I look to Sam for advice and he’s such a fantastic player. He’s like a father-figure for my rugby.”

And while Escare knows he will be under contract at Wigan in 2019 no matter what happens this year, the story is different for Navarrete. His contract expires at the end of this season and he could face an uncertain future – but the prop is in no doubt about where he wants to be after an up-and-down first year in England.

“I think I’m going to be sweet here this year,” he says. “We don’t speak about the future at the moment, but hopefully after this year we can talk about a happier future. I’m looking forward to staying in the UK this year -and hopefully for many more years to come too. I spoke with Shaun (Wane) about last year, and now I’m ready to give all I can for the club. I can’t wait.”

Home will probably always be Perpignan and the south of France for the deadly duo. But after a mixed 12 month for the pair in 2017, you get the feeling that Wigan is starting to feel like a place where they could easily begin to settle – and perhaps even discover their best rugby.