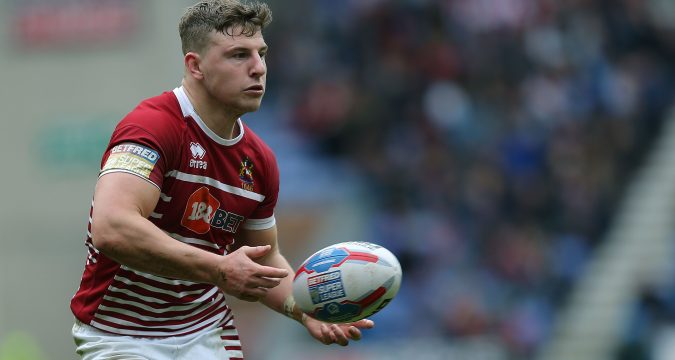 What does it even mean? Does it give a player special privileges? Does it instantly make you the best player on the team? Or does it simply mean you get a big wad of cash that’s the envy of your team-mates?

It’s hard to say really, but you’d guess that there a few challenges that come with it. The expectation, potential bitterness from opposing players and team-mates alike, tempering your own ego.

All of it is rather innocently shrugged off by George Williams, one of the few players to have taken on the tag of marquee man after signing a luxurious new contract at Wigan last year.

Despite being the top dog at his hometown club, it’s not injected any arrogance into him. He remains the same quiet, humble character to the one that first burst onto the scene several years ago.

He’s far from what you’d expect from an athlete dubbed ‘marquee’, other than the fact he’s a damn good player, of course.

“I’m proud, I’m a Wigan lad and to be a marquee player at Wigan is what dreams are made of. But you can’t buy into it. The lads might make a few jokes but that’s how it is.

“I’m a chilled person and quiet naturally. I don’t naturally talk. When I first came into the team Waney was drilling it into me that I have to bark at people. It doesn’t come naturally but I’ll work on it.”

In many ways it’s remarkable that Williams has managed to maintain such a level-headed approach to life and his career.

He made his debut aged 18. By the time he was 20, he’d already established himself in England’s setup. Now, still only 23, he has a label that defines him as one of Super League’s elite players.

But Williams will be the first to admit he’s far from the complete package. To this day his focus is on honing his skills and learning his craft.

“I’ve lived on a rollercoaster for a couple of years. I played for England at 20 and it happened pretty quick for me. It’s easy to say you’re still learning. I think you probably peak at 26 or 27 and I’m willing to learn.

“I expect a lot from myself and Waney does too. I think I’ll still go to task on myself and hopefully that will help me reach my expectations.”

That said, the halfback dismisses the notion that he still has time on his side.

Last year proved to be an underwhelming one. Wigan failed to make the play-offs and Williams’ performances didn’t make headlines either. Despite that, he went to the World Cup, but failed to force his way into the side.

“I think that reflected on my season,” he conceded.

“I think if I had played well for Wigan all year and not got picked I’d have felt better, but my performances were off for Wigan and that’s why I don’t think I played for England.”

But with a new season comes new hope. For Williams the goal is to become the player he has threatened to all his career.

“We say I’m young but I can’t keep thinking that,” he said.

“I think I’ve got to make it my own, regardless of how old I am. It’s not new anymore, I’ve got to put a stamp on it. I just want to make an impact on the Super League season and then look at the bigger picture with England.”