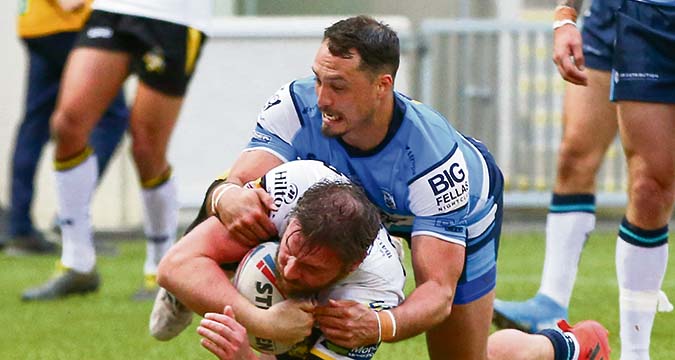 FEATHERSTONE ROVERS continued their winning start to the Championship season but were pushed all the way by York City Knights, with a dramatic Craig Hall try ensuring victory.

York led for much of the contest after first-half tries by Matty Marsh and Liam Salter, but were pegged back as their wait for a first win in their new stadium continues.

They might have at least come away with a point with Gareth Gale’s dazzling double helping leave things level going into the closing stages, but a charged-down attempt at a field goal allowed Hall to run clear and make it four wins from four for Rovers.

York struck first after six minutes, their half-backs combining superbly as Riley Dean skipped through a gap in the visiting defence before finding Marsh offering support on his inside to finish.

The first moment of individual brilliance from Gale soon brought Featherstone level. The winger received the ball on the right touchline and snuck past Jason Bass before fending off Dean and finally stepping to fool full-back Kieran Dixon and get into the corner.

Rovers were now starting to get on the front foot but their momentum was halted when John Davies was ordered to the sin bin for a cannonball tackle. Just a couple of plays later, the gap left behind in their defence was exploited as Salter crashed over from Marsh’s short pass.

Kieran Dixon converted both first-half efforts to put York 12-4 in front and, although Fa’amanu Brown’s simple penalty in front of the posts after the hooter reduced the gap to six, Featherstone should have ended the half in a stronger position.

However, Danny Kirmond had produced a quite magnificent tackle to keep them out a few minutes earlier, covering back to challenge Hall after the Rovers winger had slipped through the line and beaten Kieran Dixon. Hall might still have been able to reach the line but was panicked into an offload, which Luke Cooper couldn’t collect.

Featherstone continued to knock on the door following the restart, but they were met by further resistance as Josh Hardcastle, Junior Moors and Davies were all held up, while their own defence proved equally able to resist Chris Green and Dean before more Gale magic.

Great footwork by Dane Chisholm started it but, after an excellent Moors offload to Hardcastle, Gale took the limelight, beating Will Jubb before slipping past both Kieran Dixon and Dean to somehow to squeeze in.

Brown couldn’t convert from the touchline but they only had to wait another few minutes before drawing level at 12-12 with a penalty in front of the posts after Craig Kopczak was halted inches from the line.

That set up a contest for a one-pointer, with Dean putting the first effort narrowly wide for York. Gale then coughed up possession to give them another chance but this time Dean’s kick was charged down by Chisholm, falling into the hands of Hall to speed clear all the way to the try line and win it for Featherstone.

GAMEBREAKER: The match could have gone either way but Chisholm’s charge down of Dean’s kick allowed Hall to win the match in dramatic style.

GAMESTAR: Dane Chisholm was safe under the high ball while offering great attacking threat from full-back, and helped provide the winning score as well.

For full coverage of the other Betfred Championship games this weekend get the latest edition of League Express, on newsstands every Monday in the UK and as a digital download. Click here for more details.