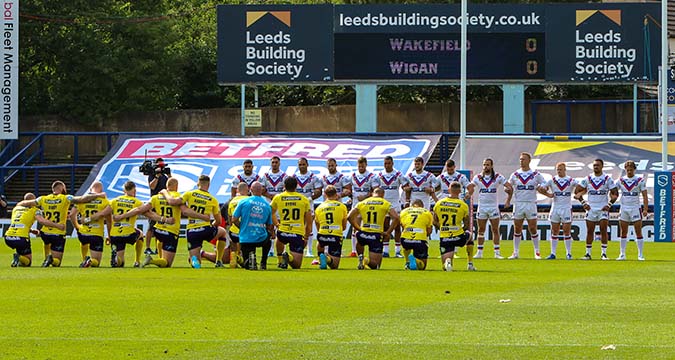 Here are the letters that were published in this week’s Mailbag in League Express, with the Black Lives Matter ‘taking the knee’ figuring highly. If you would like to have a letter published in Rugby League’s leading weekly newspaper, send an email to mailbag@totalrl.com. You must include your full address and a telephone number.

SAUCE FOR THE GOOSE BUT NOT THE GANDER?
Since Toronto pulled out of the 2020 Super League, I have read numerous letters saying they are a disgrace, that they should be kicked out as they have not completed the season, that it makes the RFL a laughing stock and so on.
Why a laughing stock? Why should the Toronto Wolfpack be treated any differently to the Championship and League 1 clubs that have also pulled out of this year’s competition?
Rugby League must expand into new markets. Failing that, TV deals that are the lifeblood of our sport will dwindle.
We have tried and failed numerous times to develop historical clubs in small towns, but they do not have the populations needed to support the kind of successful, large club teams that will attract sizeable television audiences.
So let Toronto play in Super League next year, provided all players’ salaries are paid up to date and players have written guarantees that all contracts will be honoured.
Plus there was an excellent and surprising comeback by the Rhinos against the Giants. I cannot wait to get back in the South Stand; my cardboard twin needs evicting.
Philip Hill, Pudsey

NOT INCLUSIVELY INCLINED
Geoff Bullock’s views on the Toronto club in last week’s League Express were an interesting read.
To him, it seems the whole of North America, including Toronto, doesn’t have a single ‘real community’ nor can the Toronto Wolfpack be a ‘real Rugby League team’.
Have they been throwing an imaginary ball around for several years?
When will some people realise that Rugby League is not a belonging? We want people to love our game. We should love other people loving it but, to Geoff Bullock, you can only love it if you come from a ‘real community’.
Sorry, most of the world, that does not include you.
Mike Wrench, Warrington

POLITICAL MESSAGES NOT WELCOME
I did not expect ever to be writing to League Express in support of Israel Folau, but one has to admire someone who stands up for what he believes in, knowing that he will take abuse and criticism.
The ‘woke’ minorities, however, believe that freedom of speech is the prerogative only of those who share their opinions.
Last weekend we witnessed the unedifying sight of thirty-three Super League players ‘taking the knee’ in support of Black Lives Matter, an avowedly political movement whose aims include defunding the police and destroying capitalism; in other words advocating anarchy.
Of all those on the field that day, only Folau stood out against it, although many F1 drivers at Silverstone did the same on that same afternoon.
Racism in people of any colour aimed at those of any other is clearly evil and must be tackled whole-heartedly. But it could be argued that ‘Black Lives Matter’ is insulting to all other ethnic groups, whether Asian, Caucasian, Indochinese, Native American or whatever.
Had those players carried slogans emphasising that ‘All Lives Matter’, or ‘Stop Racism Now’, I am sure most of us would give them a hundred per cent support.
I understand that Super League told its clubs to ‘take the knee’. I hope that position was not dictated by the need to secure the next TV contract and funding, given the stance Sky Sports has taken in giving support to the ‘Black Lives Matter’ movement.
League Express warns that mixing politics and sport is more likely to create division than unity. Leon Pryce is spot on when he comments that ‘nobody should feel they are forced to do something they are not comfortable with’.
I hope that, in the coming weeks every club, every player and every Sky commentator will think seriously about their actions on this.
Showing support for a divisive, politicised movement is not the way to overcome the evils of racism in any form.
Mike Tudor, Exminster

NO NEED TO TAKE THE KNEE
The caption in last week’s League Express stating that Israel Folau had “refused” to “take the knee” before the match against St Helens was balanced by the editorial in the paper which was firmly against the mixing of politics with sport.
To state that someone had refused to take the knee has about as much relevance as saying a a man refused to go on one knee to propose to his woman. It is something a person is either inclined to do or not, it is not an obligation.
The history in the US of racist actions against black Americans has unjustifiably come over here, and the image of violence against black people generally is something the US will have to deal with. But we in the UK do not and I strongly object to the indiscriminate blanket of guilt, which is being thrown over our very tolerant society.
The statement that black lives matter is blindingly obvious to any human being, as is the statement that white lives matter. But a banner flown over Turf Moor proclaiming the latter, only days after three of our citizens had been butchered in Reading by a Jihadist, resulted in Burnley Football Club descending into a meltdown of grovelling apology.
Management did not know what it was expected to say. This is why the issue should remain in the consciences of players officials and spectators, and not in the public arena.
From a Rugby League point of view, expecting our game to ‘take the knee’ is like expecting an eminent surgeon who has taken the Hippocratic Oath to enrol on a boy scouts first-aid course. We don’t need it and especially so if it is done to avoid a backlash for not doing it. Rugby League needs to bow down to no one on this subject.
There was a marvellous suggestion from Bill Rees of Wakefield in Mailbag a few weeks ago – that the descendants of Rugby League’s first black player, the American Lucius Banks, who played for Hunslet, should be invited as guests of honour to next years Rugby League World Cup over here.
This would be a more fitting measure of Rugby League’s respect for black people than the media-fuelled compliance that is going on at the moment.
Bill Anderson, Parbold

TIME TO STOP
Just when I was about to enjoy the return of Rugby League last week, what I got was a night of Black Lives Matter.
Folau had every right to refuse to kneel. I certainly never will.
I firmly hope that when we get to return to our stadiums the kneeling will have stopped.
Politics has no place in Rugby League. I believe this has turned the clocks back at least 50 years.
I am 72 and have supported Hull FC for 62 years, but I have never seen anything like this before. It has to stop.
Barry Frederick King, Hull

NO GESTURE POLITICS, PLEASE
I am saddened our great sport should have been ‘brought to its knees’ by political gesturing.
It beggars belief that we should have let ourselves get dragged into this ultra-divisive issue of kneeling or not kneeling for an issue promoted by a political pressure group, creating division in a sport that is proud of its tolerance. I hope the current Super League administration thinks what happened is worth it.
It has, however, made me seriously question my involvement in, and love of this sport for the future, as I do not want to associate myself with any such gesturing.
Phil Watson, York

ONE FROM BILLY B
When Bill Wookey died last year his wife Sheila gave me his scrapbook.
In it there was a report on the 1958 tour trials. Next to it was a photo of Billy Boston, which had on it ‘To Bill Wookey, best wishes, Billy Boston’.
On the tour Bill played ten matches and scored ten tries.
Syd Greenhalgh, Barrow-in-Furness

ACADEMY SUCCESSES
Well done to Huddersfield and Wakefield Academy for producing eleven Academy players each.
In Rugby League, youth is the future.
Catalans have also tied down four junior Academy players that might otherwise have gone to Union.
Also, I hope Toronto can come back.
C Stokes, Nottingham

TO EACH HIS OWN
I was interested to read Garry Schofield’s column comparing modern halfbacks unfavourably to some of the greats within living memory. I agree with him entirely.
For me, no halfback playing today can compare with the brilliance of Sean Long, from the early days of Super League, although my father says Long was an absolute beginner compared to the great Alex Murphy.
My grandfather, when he was alive, told me that Alex Murphy wasn’t good enough to tie the bootlaces of the great Jonty Parkin, who played in the 1920s. And my great-grandfather is on record as saying that Parkin was ‘absolutely hopeless’ compared to the great Albert Goldthorpe, who I’m glad to see your publication recognises.
I have already told my children that the halfbacks playing in Super League today are miles better than the ones they will be watching in 2040.
Bill Rees, Wakefield

LITTLE SLIPS LET SKY DOWN
The amazing product, Super League, is let down by its embarrassingly amateur Sky Sports commentary team.
In the two games last Sunday they managed to get Kyle Amor’s age wrong, Alex Walmsley’s height wrong, and to nearly wet themselves with excitement at Rhyse Martin getting bitten by a dog.
I find it lacklustre and lazy that they cannot be bothered to learn statistics before they go on air in well-paid jobs. Time for a change from the ‘Baz n Tez’ cringe fest!
James Rooks, Preston