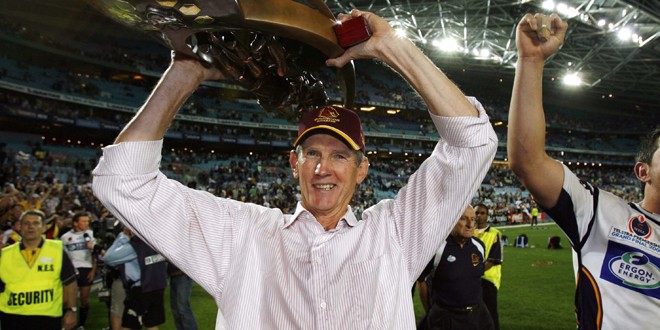 The RFL has announced that Wayne Bennett is to become the new Head Coach of the England Rugby League team.

The most successful Australian Rugby League coach in history has agreed a two-year deal that will see him take charge of the England team through the 2016 Four Nations and 2017 World Cup.

Speaking about his appointment, Wayne Bennett, said: “I am very excited by the challenge of taking England on to the next level.

“From what I have seen I have been impressed by the ambition and energy demonstrated by the team and I look forward to working with a group of players that I believe have what it takes to succeed on the international stage.”

Bennett, who has a record seven NRL Grand Final wins as a coach, will continue in his role as head coach of the Brisbane Broncos and will travel across to the UK in February as his side take on Wigan Warriors as part of the Dacia World Club Series involving the top sides from the Telstra NRL Premiership and First Utility Super League.

Speaking following the announcement, RFL Chief Executive Nigel Wood, said: “Wayne is quite rightly regarded as the outstanding coach of this generation and I am delighted that we have been able to secure his services.

“This England team has made considerable progress over the last few years and we now possess truly world class players across all positions. These players deserve the very best support and coaching as we attempt to move from contenders into potential winners of international tournaments.

“I believe that Wayne Bennett is undoubtedly the right man to lead this group forward and enable them to do this”.

“We will be discussing with Wayne in due course the coaching support he will need which we expect will be UK based”.

The news came just hours after the RFL confirmed that Steve McNamara would not be offered a new contract as England head coach.