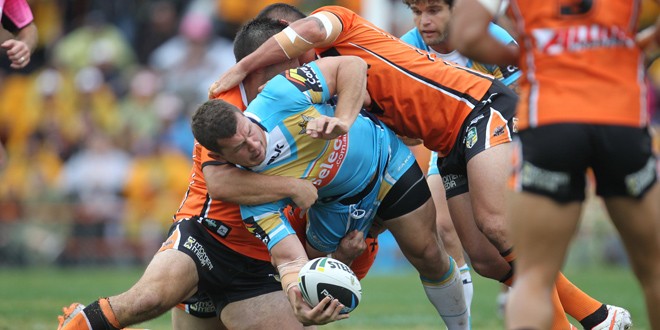 Australia second-rower Greg Bird has put his hand up to play at stand-off for New South Wales in the upcoming State of Origin series.

The 29-year-old Gold Coast star, who was named in Australia’s side to face New Zealand in the Anzac Test on Friday, played in the halves when he first broke into first grade Rugby League and feels he is well-placed to deputise for the injured James Maloney and Todd Carney, who are usually first choice for the state.

“I am always happy to play five-eighth for NSW, I have played some of my best football there,” said Bird.

“Ideally, I think there are better players who are probably more suited and I think I am more suited to the forwards but the way that Toddy and Jimmy went down the other day it probably does put a lot of pressure on the selectors.

“To be honest, I weigh exactly the same and I can do the same things I could do then so there is no reason I couldn’t play the position.

“I have played one-off games for the Titans every now and then when Aiden [Sezer] or Alby [Albert Kelly] have gone down so it is not completely foreign to me. It is like riding a bike, I am a Rugby League player at the end of the day and it doesn’t particularly matter what number you put on my back.”