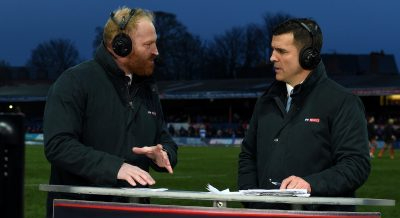 Brian Carney believes the 2020 Super League Grand Final is the toughest to predict in the event’s history.

Wigan and St Helens will lock horns on Friday in a battle of the competition’s two outstanding sides.

Carney, who will host Sky Sports’ coverage of the Final, which starts at 7 PM on Sky Sports Main Event, has predicted the two great rivals to engage in war.

“There may have been Grand Finals equally as tight but I can’t recall one,” he said.

“There was always something in the background. Warrington; could they do it or would this be their year, with Leeds, they’ve been here once, can they do it again?

“I can’t split them. If we ever had a reason to tune into the Grand Final, it’s on Friday, and what’s even more special is what they gave us four weeks ago, and if that’s the appetiser for the main course, it’s sinful not to tune in and watch the game.

“Wigan won that game, does that in any way make them slight favourites? Not a chance, because the counter-balance was the absence of Alex Walmsley. If you put Alex Walmsley in that side you’re looking at a tight game. If there’s a chance of a Grand Final going to Golden Point extra-time, we’ve got it on Friday.

“I think we’re going to see a fractious Grand Final, in fact, I’m quite hoping we do. That game they gave us four weeks ago had that much nastiness attached to it, it was eye-opening. But not only did they physically want to get into them, verbally they wanted them to know they were standing up to them and St Helens got dragged into the trenches and it didn’t suit them as much as it did Wigan.

“I’m expecting a legally brutal edge to this Grand Final. It’s about St Helens avoiding getting dragged into the trenches and playing the game on their terms.”

Either side of the match (6.30pm & 10pm) there will also be a showing of “Rob Burrow: The Magnificent Seven” – a tribute to Rob Burrow’s career.