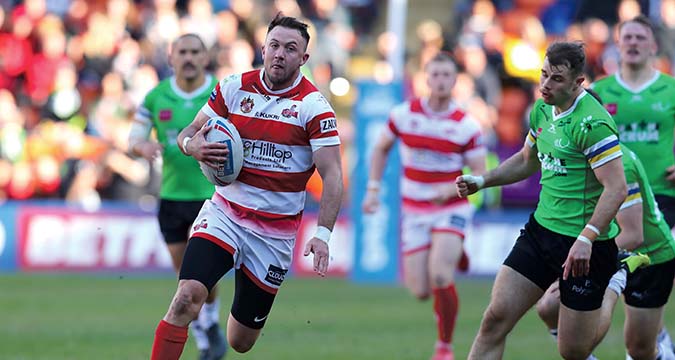 Ryan Brierley is Leigh through and through and you’d be forgiven for thinking he came through the Centurions’ ranks.

Yet the 28-year-old, despite being born in Lancashire, was a part of the Castleford Tigers’ youth setup, joining them in 2009.

He failed to make a first-team appearance for the Tigers, however, instead signing for Leigh ahead of the 2012 season. Brierley has no regrets about leaving, though he was disappointed not to run out in a Castleford shirt.

“It was awesome for my development and it gave me my first step onto the ladder, so I will always be grateful,” he says.

“But I suppose there will always be an itch that I didn’t play for the first team.”

Almost overnight, however, the playmaker became a cult hero at the Leigh Sports Village, scoring 133 tries in 125 appearances. In the process, Brierley became the club’s top scorer for four consecutive seasons between 2012 and 2015.

“Leigh is where I’ve always felt most at home – I don’t know what it is, we just fit.

“I have a connection with the fans and the club. Derek (Beaumont) and Duffs (John Duffy) have progressed the club so much.”

To get a shot in Super League, Brierley left Leigh to sign for Huddersfield Giants, but managed just 26 appearances in two seasons, with the wiry flier admitting it wasn’t a perfect fit.

“Huddersfield was tough, if I’m honest. I never really had a settled coach or position and probably just never settled into any sort of rhythm, but I wish the club all the best.

“The staff, players and fans were great with me and it’s a shame it didn’t work out.”

“Toronto and Hull KR were great life experiences for me – living away from home certainly tests your character.

“Last year, especially at Hull KR, I felt I got my career back on track and earned some respect from my peers.”

Now Brierley is back where the magic first started – at the Leigh Sports Village – and he couldn’t be happier, especially with the Centurions now back in Super League after a three-year hiatus. But, he is very aware of the difficulties the club faces back in the big time.

“My aim for Leigh is simple: stay in Super League. It will be a successful year if that happens.”