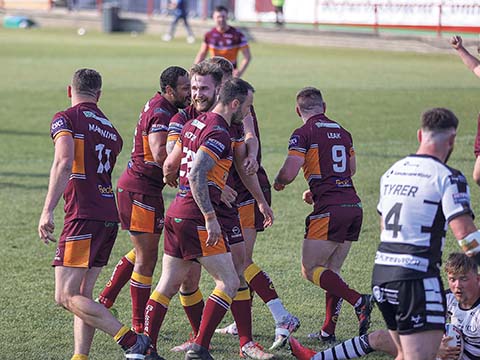 Gareth Walker hears how Craig Lingard has turned Batley around

For many Championship clubs, the cancelled 2020 season proved a major disappointment.

But for Craig Lingard, it presented opportunity.

Newly appointed at the club where he became all-time top try scorer as a player, Lingard saw his side lose four of their first five league matches while being dumped out of the Challenge Cup.

Fast-forward just over a year and Lingard’s reshaped squad went into Sunday’s clash with Halifax after winning seven of their opening 2021 matches to emerge as the competition dark horses.

“It was a bit of a strange one because when I went in it was late in the off-season and in terms of recruitment there wasn’t a great deal I could do,” Lingard explained.

“I managed to get a few players in who I wanted, but the vast majority of recruitment had already been done. I got a squad given to me rather than putting one together myself.

“But it gave me an opportunity in those five league games and in the Challenge Cup to look at what I thought we were missing.

“I didn’t think we had enough quality in some areas to compete; it could have been a long, difficult year, but fortunately for us the curtailed season gave me a chance to look at who we could bring in. We used the lockdown in a really positive matter.

“We always knew we had a tough set of middles that we wanted to keep, but we needed some strike and pace on the edges and a dominant half.

“We managed to get that in Tom Gilmore. We were fortunate that, because of Covid, Ottawa couldn’t come in and he became available.

“He’s been an absolutely fantastic signing for us. Not only has he played well, but he’s allowed Ben White to come out of his shell and play his natural game.

“We’ve had a really good spine, with Luke Hooley playing well at fullback. With Jack Logan, Jodie Broughton, Kieran Buchanan and Elliot Hall outside we’ve got some real punch and strike on the edge.

“And Johnny Campbell has been fantastic for us there as well.”

Lingard also picked out hooker Ben Kaye and forward Niall Flynn for praise, but insists he has not reset the club’s goals for the 2021 campaign.

“It’s not changed as yet, but it may do when we get halfway through the season,” he said.

“I think the players have got a bit giddy and excited, but as long as they’re working as hard as they are I’m happy for them to have some expectations of themselves.

“We said as a coaching group that we’d sit down halfway through and have a look at things.

“We did say at the start was that seven wins should be enough to keep us in this division, and we’ve ticked that off already, so now we want to secure our place in the play-off positions.”

And that must please long-serving Bulldogs Chairman Kevin Nicholas, who Lingard revealed had one reservation about his appointment.

“When I came back, Kevin was a little bit apprehensive that the relationship I had with the club from my time as a player and assistant coach would end with a sour taste if I didn’t have success as a coach, and that we could part on bad terms,” Lingard added.

“But I’m fully aware that as a coach you only leave either when you’re sacked or you move on to something else, and that will happen to me at some stage.

“But however I leave the club it wouldn’t impact on the relationships I’ve built with Kevin, Paul Harrison and other people over the 23 years I’ve been associated with Batley.

“One of the big things I wanted to develop here was making sure that every person knows that their contribution at the club matters.

“Whether it’s someone selling golden-gamble tickets, working on the car park or the turnstiles, everyone should feel wanted and that they are playing a big part.

“If you get divisions between players and spectators, and a them and us feeling, then it’s not a good relationship to have.

“The family part of Batley has always been there and it’s massively important to me that we harness it this year.”