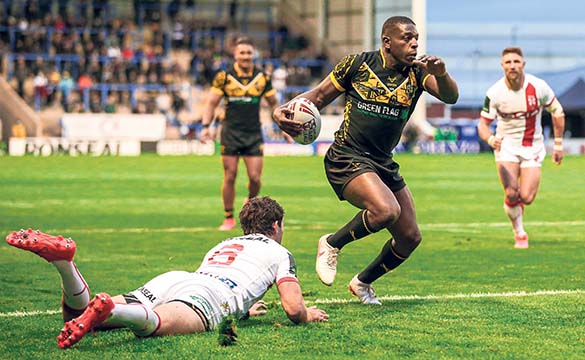 Well, international Rugby League finally returned when England took on the Combined Nations All Stars at Warrington on Friday, and all I can say is garbage, garbage, garbage.

Shaun Wane did his best to pick some positives at the end of a week which was made pretty chaotic by worrying Covid outbreaks and the lack of respect shown by so many Super League clubs for the international game.

But he must be a worried man after watching a performance in which more players played themselves out of contention for the World Cup, whether it takes place this year or next, than in.

Only Sam Tomkins, Ben Currie, Tommy Makinson, Morgan Knowles and Liam Farrell were anything like. And even with the addition of NRL-based players, it’s hard to see how we can come close to making a genuine challenge to win the tournament.

We just don’t have enough quality or depth in the squad to compete with the Aussies, and while it wasn’t our best side, the opposition, while having some decent players in their ranks, were nothing like as strong as the high-ranking Southern Hemisphere national teams.

Well done to Jermaine McGillvary for having the guts to come out and say what so many are thinking.

For some hard-to-fathom reason, the highly-experienced winger was playing for the Combined Nations rather than England. He scored a try in his side’s success, then pointed out how our game in “in decline”. And he’s spot-on.

As Jermaine said, we needs a much stronger international scene if the sport is to grow.

Now I really am one-eyed

Regular readers of this column may know I’ve had an eye problem since December 2019, when I suffered a detached retina.

Unfortunately, after seven operations, three laser treatments and all the unstinting efforts of the superb staff at St James’s Hospital in Leeds, I’ve been told the damage is irreparable.

It means I have lost the sight in my left eye, which is obviously a huge blow.

I’ve had severely impaired vision in that eye ever since the detachment, so I’ve grown used to coping and I’ve been able to prepare myself for this scenario.

At least now I can come to terms with the situation, move forward and hopefully get back to as normal a life as I can, given the issues we have all been facing.

A lot has been said and written about the strain the pandemic has put on the NHS, and during my treatment, I’ve witnessed some of the challenges which have been posed.

But even in such difficult circumstances, the care and support I have received has been absolutely first class, and I’d like to thank all those involved.

Going forward, I’ll wear a special contact lens which will mask the blurred vision and help me adjust to seeing only out of the other eye.

And, let’s face it, some people have been calling me one-eyed for years!

I’m also going to hold an annual golf day to raise funds for charities for the blind and visually impaired.

These will run alongside my annual golf day in aid of Rob Burrow and the fight against motor neurone disease, the first of which, having had to be rearranged due to Covid restrictions, takes place at Normanton Golf Club on Thursday, September 23.

I’ll have further details of my plans in due course.

My tips are improving

I had pretty pleased with my predictions for (last) Thursday’s three Super League matches.

I said Wakefield would beat Wigan by ten (it was eight), Warrington would see off Leigh by 36 (it was 26) and that Catalans would win by ten at Castleford, which they did.

And while I was a bit off with the margin of victory, Hull did beat Huddersfield on Friday.

It was another very decent display by the table-topping Dragons, a ninth win out of ten this season achieved without either fullback Sam Tomkins or winger Tom Davies.

Full marks to those two, by the way, for driving all the way from the South of France to link up with their old Wigan coach Shaun Wane and the rest of the England squad.

That’s a sign of the commitment and passion which will be needed by the whole side if we are to get back to the World Cup Final.

Catalans have made their best-ever start to a Super League campaign, and as I’ve said a couple of times, if they can keep their house in order discipline wise, there’s no reason why they can’t continue in their current vein.

They have some talented players, they are well coached and on their day, they are great to watch.

As for Castleford, while they had some key men missing, is the forthcoming Challenge Cup Final in the back of their minds?

For Warrington, it was a fifth league win on the spin, and perhaps we could see them squaring up to the Catalans at Old Trafford in October.

It was good to see some of their young prospects like Josh Thewlis, Connor Wrench, Ellis Longstaff and Eribe Doro holding their own as they were given a platform to shine in the absence of those involved in the England-Combined Nations clash.

George Williams, who has been strongly linked with Warrington, didn’t play in either match, and hopefully he will get sorted for the reminder of this season soon.

To have a player of his quality kicking his heels for too much longer would be a massive shame, especially in this of all years.

As for Leigh, things are looking very bleak, and I have to say, I found it a tough watch.

They just don’t have enough quality in the squad, and it’s hard to see anything other than an immediate return to the Championship, possibly in a worse state than they were before taking Toronto’s place in the top flight.

That’s a shame, because they are a great old club with a loyal support base, but as things stand, that gap between the Championship and Super League is so hard to bridge, especially when all the existing clubs get that head start when it comes to squad building.

Wigan have now suffered four defeats running, and you have to wonder what’s going on and whether Adrian Lam will see out the season.

Even with some of their younger players in the side, they should have given Wakefield more of a game.

And while he wasn’t on club duty, what on earth has happened to John Bateman when wearing a Wigan shirt? He looks a shadow of his former self, and much more needs to be extracted from such a talented player.