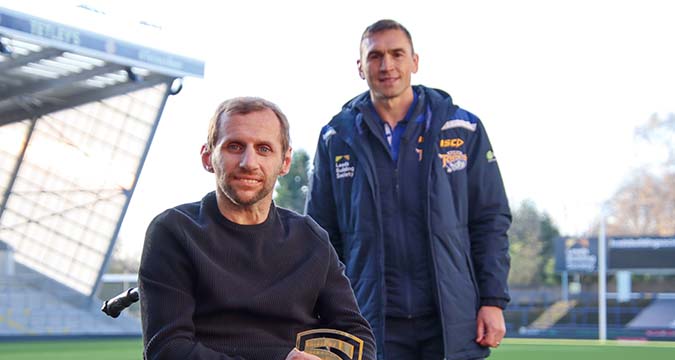 Kevin Sinfield says contemplating the challenges faced by his former team-mate Rob Burrow contributed to his decision to leave his Director of Rugby role at Leeds Rhinos at the end of the season to join rugby union club Leicester Tigers as defence coach.

In December, the 40-year-old former Rhinos and England captain ran seven marathons in seven days and raised £2.2 million in support of Burrow, who is living with motor neurone disease.

Sinfield, recently awarded the OBE for fundraising and services to Rugby League, said: “I got some perspective from Rob.

“It certainly hammered it home to me that you’ve got to do something you truly enjoy and get satisfaction from. That’s where I find myself.

“I haven’t enjoyed it (the job of late) and it’s time for me to embark on a new challenge, and do something new.”

As well as being the club’s record points-scorer, he is the highest scorer in Super League and the third-highest points-scorer in British rugby league history.

He won 14 caps for Great Britain and another 26 for England.

After his last match for Leeds in 2015, he had a brief stint in rugby union as a player with the Rhinos’ sister club Yorkshire Carnegie before being recruited by the Rugby Football League to be its rugby director.

He returned to Headingley in a similar capacity in 2018.

“This has been one of the hardest decisions of my career,” he said.

“When I returned, I always said I would review my role after three years and that my reason for coming back was to help the club.

“The last 18 months have been a huge challenge and the role has changed significantly from the job I first came to do.

“My position is now further away from performance than I ever thought it would be.”

Leeds chief executive Gary Hetherington said: “Like all Rhinos fans, I am extremely disappointed with Kevin’s decision. We always hoped he would enjoy a long career with us.

“I agree the director of rugby role has changed and we did discuss other roles at the club, but it is not to be. Undoubtedly, he will leave the club in a much better position than when he returned.”