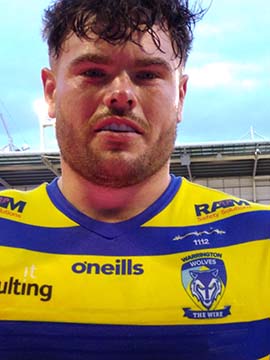 Warrington Wolves Supporters’ Trust and Squadbuilder have paid tribute to the club for adopting an idea they put forward to recognise players who come through the club’s own Academy system.

The Trust has created a new Wire Academy Graduate logo, which will feature on the playing shirts of the club’s home-grown first-team regulars, including Mike Cooper, Ben Currie, Joe Philbin and Toby King.

The new logo was worn for the first time at the recent Super League home game against Wakefield Trinity.

“Massive thanks to the Warrington Wolves for approving and introducing this Squadbuilder idea and to O’Neill’s for facilitating the production of the logo,” said a Trust spokesperson.

One player who won’t qualify to wear the new logo, however, is Gareth Widdop, who has been strongly linked to a move back to the NRL, perhaps before the end of the season if the club swoops, as expected, to sign former Wigan halfback George Williams.

However, Wolves CEO Karl Fitzpatrick insists that Widdop is settled at the club and they have no intentions of releasing him from his contract.

“The reports are way off the mark,” he said.

“Gareth is currently very happy at the club and I think this shows in his performances.

“If we did get approached from the NRL we’d have no intention to release him early.”