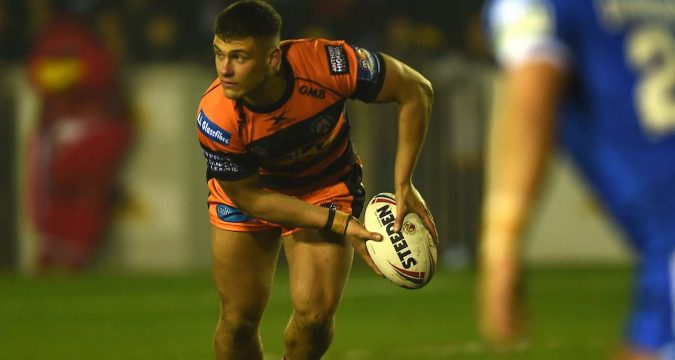 Castleford Tigers have announced that Jacques O’Neill has agreed a new two-year contract, which will keep him at the club until the end of the 2023 season.

The 22-year-old is a product of the Tigers’ youth system, coming through both the Scholarship and Academy programmes before making his senior Super League debut in 2019.

O’Neill, who joined the Tigers from the Askam club near Barrow, has been called up for the most recent England Knights squad alongside his team-mates Danny Richardson and Jake Trueman.

“I wasn’t really looking to go anywhere else. I want to keep progressing in my career here.

O’Neill is popular with the Castleford supporters, primarily because of his obvious enthusiasm and determination to succeed.

“In anything I do, whether it’s away from the field or on it, I just want to try my best in everything and I don’t want to lose.”

Originally a hooker, O’Neill has developed into an effective loose forward under Tigers coach Daryl Powell.

“I remember when he got me in the office one year when I was still playing in the Academy and he went ‘I want you to play 13 instead of 9’, but all I’d known was hooker, and when he said that I was not too sure. Now I have to thank him because I enjoy loose more than I do hooker, I feel like I can use more of my attributes there, but I would play anywhere for the team.

“The least we can do is try win the Challenge Cup for him, for the club, and for the fans, because everyone deserves it here, they’re so loyal and Powelly has been massive to it all.”

Lee Radford, who will coach Castleford in 2022, is happy to see O’Neill staying with the club.

“I like him, he is just full of energy, really game,” said Radford.

“Jacques is definitely someone that I am excited to coach because I think there is so much improvement in him as well.

“It excites me that he is still young and there are areas of his game where he can get better and we can get the best out of him.”