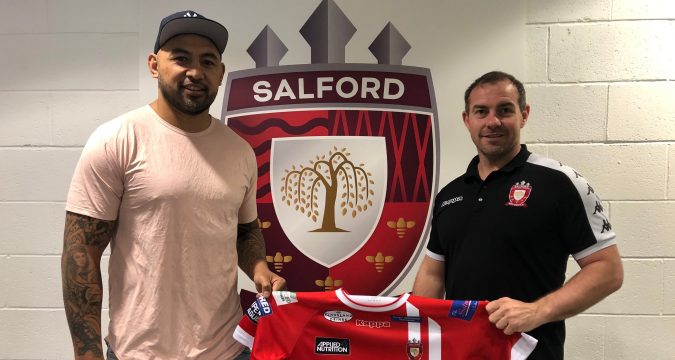 JACK IRELAND asks whether Salford can take one final step to glory on Saturday afternoon.

Who could have imagined, 12 months on from their maiden Grand Final appearance, that Salford Red Devils would be appearing in yet another major Rugby League final?

The Challenge Cup Final is only three days away, and the players from Greater Manchester know they are within 80 minutes from making history in the nation’s capital.

Ian Watson has done a terrific job so far in the competition, but he knows there is one more hurdle to overcome if they are to lift the prestigious trophy for the first time since the 1937-38 season – the Leeds Rhinos.

The Rhinos are on the rise and look like a completely different team to the one that lost their opening game of the season convincingly at the hands of Hull FC.

Leeds know what it takes to win the Challenge Cup, having done so recently in 2014 and 2015, so Salford will need to rely on their strike players to give them that cutting edge come Saturday afternoon.

While they have struggled for consistency in the league in 2020, the Red Devils have found success with knockout competitions, having already dispatched 2018 winners the Catalans Dragons and last years’ winners the Warrington Wolves.

Their majestic run to the Grand Final in 2019 was a fairytale story, but unfortunately did not have the ending many were hoping for. Now they have the chance to go one step further and win the Challenge Cup in what has been a disrupted season.

One player who could make all the difference come Saturday is Krisnan Inu.

The former NRL star has lit up the 2020 season with his aerial ability, strong finishing, and reliable kicking from the tee, with many pundits expecting the outside back to hold the key to claiming Challenge Cup glory for the Red Devils.

Sky Sports reporter, Jenna Brooks, believes that Inu is now at the very top of his game.

She said: “Speaking to Krisnan after their win over Huddersfield on Thursday, he mentioned Salford are not getting ahead of themselves, and know they have some improvements to make before the weekend.

“And hasn’t Inu made some improvements in his game? He scored a hat-trick against Huddersfield last week and there’s not many at the moment who are better with the boot than the former Kiwi international.”

Another player Ian Watson will be hoping can have the desired effect is halfback Tui Lolohea.

The former Leeds man has a point to prove to his former employer, having switched to Salford midway through the 2019 season. His partnership with Rugby League stalwart Kevin Brown continues to flourish; so could Leeds soon be regretting the decision to let him go?

Jenna also believes Saturday’s final could prove to have more upsets on the cards.

She added: “I think a lot of people were anticipating a Wigan – Warrington final, but how good is it to see Leeds contesting the Cup for the first time since 2015 and Salford back in another major final.

“What makes it even more exciting is the fact that Salford haven’t played at Wembley since man walked on the moon in 1969.

“I think Saturday will be a game for the ages and yes, Salford have every chance of upsetting the odds and lifting that famous Cup.”

Can the class of 2020 do what no other Salford team has done since 1938 and lift the Challenge Cup?

Although no fans will be present at Wembley Stadium, we can expect large parts of Greater Manchester to be in high spirits on Saturday morning, as the Red Devils aim to make history… again.