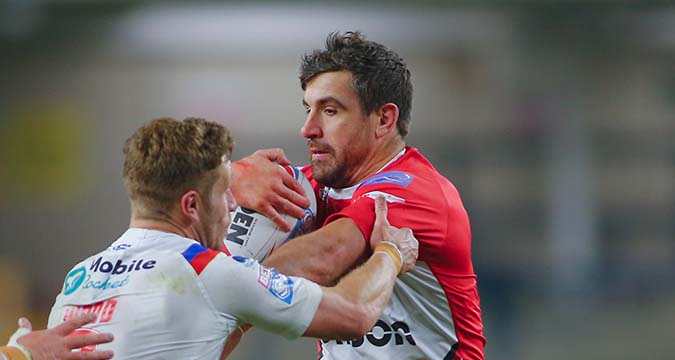 Loose forward McCarthy scored one try in 18 games for the Red Devils in 2020 and featured in the Challenge Cup Final defeat by Leeds Rhinos at Wembley.

McCarthy has previously played for Leigh, spending time on loan there from Warrington in 2010, playing fourteen games and scoring three tries, while he also has NRL experience with St George Illawarra.

A Warrington junior, McCarthy debuted for the Wolves in 2009.

During his four years at his hometown club he has also had loan spells at Wakefield and Swinton, as well as Leigh.

After playing 43 games for the Wolves he moved down under to join Northern Pride in the Queensland Cup.

He helped the Pride win the competition and NRL State Championship before returning to Super League with Hull KR.

He led the Robins to the Challenge Cup Final before heading back to Australia to join St George Illawarra.

The veteran made two NRL appearances for the Dragons and then signed for Salford in 2017.

McCarthy has made 73 appearances for the Red Devils over the past four seasons, also appearing in the 2019 Grand Final at Old Trafford.

McCarthy has also played 19 Tests for Ireland, including appearances at both the 2013 and 2017 World Cups.

He is keen to play on this season and to represent the Wolfhounds in the 2021 World Cup, and he has been reported to be training by himself in a bit to keep fit.

Leigh coach John Duffy played alongside McCarthy in 2010 and he said he always thought McCarthy was destined for great things.

“As a young player coming through, Tyrone always stood out as someone who was likely to play a lot of games at the top level and so it proved,” said Duffy.

“I will be looking for our players to match his high standards on and off the pitch.

“Tyrone is a durable, hard-working player who will fit straight into our group.”

Leigh were promoted to Super League after their application was approved by the committee selected to decide on the replacement for Toronto Wolfpack, after they were refused entry for 2021, and McCarthy is hoping to help the club consolidate its place in Super League.

“I was holding out to get a Super League contract and Garreth Carvell got in touch and asked whether I would like to get involved at Leigh.

“It’s a long time since I played for Leigh, and the only survivor from then is Jamie Ellis, but I also played with Blake Wallace in Australia. I have a great relationship with John (Duffy) and a great deal of respect for him.

“I’ll try to lead by example and hope to inspire the players around me.

“Playing for Ireland in the World Cup is my end goal.

“This year is going to be a hard challenge for Leigh, but if the fans get behind us I’m sure we’ll enjoy some great success together.”