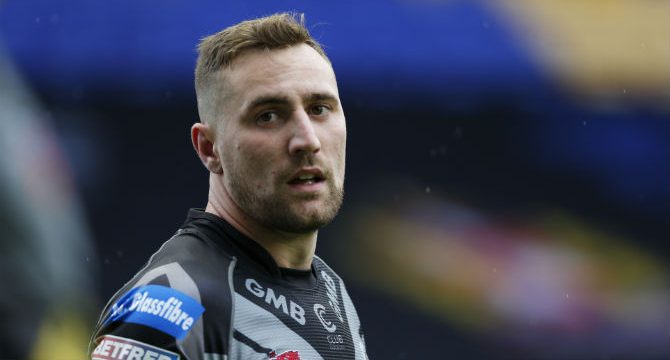 But even more important is the club’s role as the heartbeat of the town.

That was shown last year, when the Tigers went into the lockdown in March in joint first place in Super League, but, without the support of their fans on the terraces, they fell out of the play-off positions by the end of the season.

For the fans, their inability to be on the terraces at Wheldon Road was heart-breaking. Two hours of socialising with friends, loved ones and even convivial strangers on a match day is invaluable time for many residents of the town.

All the Castleford players shared that feeling, although one of them, James Clare (pictured), at least had some consolation during the lockdown during his eighth year as a Tiger.

“The birth of my little boy Arthur made lockdown an incredible experience,” he said.

“I love Rugby League so much that it was difficult not having it in my life, but thankfully (with Arthur) I had something to fill in the blanks.”

“It’s been a strange time with the Covid protocols. But we are professionals and we understand how important the rules are. A repeat of last year could jeopardise our season. We need our fans back.”

Clare is fervently hoping that fans will be back soon after the new season begins, and that the disruption of 2020 will soon be a memory.

“Anyone with the mildest of symptoms ended up missing training for three to four days while they got a test and results.”

Despite that, however, Clare insists that the Tigers’ pre-season has been relatively unaffected.

“Pre-season has been great so far,” he says.

“I’m not sure if it’s because of the extra time away last year, but it feels like everyone has come back revitalised and refocused.

“Everyone has impressed me, but the two that have stood out are Shenny (Michael Shenton) and Milo (Grant Millington). Neither of them have shown signs of slowing down as they grow older (both of them are 34). Both are leading from the front this year.”

The Tigers revealed their 2021 squad numbers at a virtual event for the club sponsors on Friday night and Clare was given the number 20 shirt, as opposed to the number 21 he wore in 2020.

Newcomer Niall Evalds takes the number one shirt, suggesting he will be the first choice fullback to start the season over last year’s recruit Gareth O’Brien, with O’Brien taking the number 16 shirt, while the former Huddersfield Giants duo Suaia Matagi and Jordan Turner receive squad numbers 24 and 25 respectively, while Lewis Bienek, the club’s new signing from Hull FC, will wear number 26.

Sosaia Feki retains the squad number 5, despite having been prevented by injury from playing a single Super League game in 2020, although he did play one game for the Tigers in the Challenge Cup.