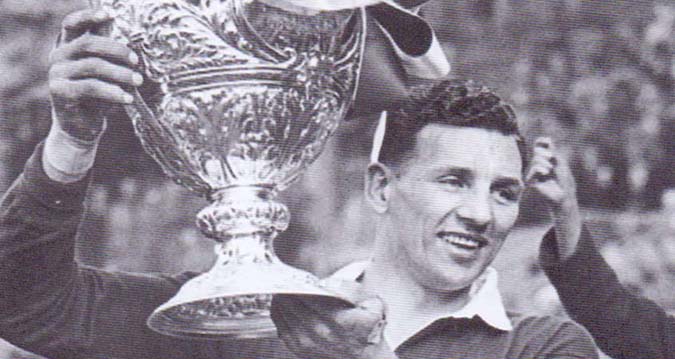 For all their long history, it may surprise some people to learn that Salford only have one Challenge Cup Final victory to their name. It came on 7 May 1938 when they narrowly defeated Barrow 7-4 in front of 51,243 spectators at Wembley.

Their victory, which was only secured by a late try in the final minute from centre Albert Gear, involved three individuals who are highly significant in the annals of sporting history.

Gus Risman (pictured), an inaugural inductee into the Rugby League Hall of Fame, was their captain. Gus would make two winning visits to Wembley that were, remarkably, 14 years apart. He would return in 1952 at the age of 41 as Workington Town defeated Featherstone Rovers 18-10.

Their manager was the New Zealander Lance Todd, who had been one of the New Zealand All Golds tourists who blazed an international trail for Rugby League in 1907. Todd’s name would be commemorated at each Challenge Cup Final from 1946 onwards by the trophy named after him and awarded each year to the Player of the Match.

The Challenge Cup was presented by Donald Bradman, perhaps the most famous cricketer of all time, who had arrived in England as the captain of the 1938 Australian team to contest the Ashes series.

The match itself was played in warm, sunny weather, but it proved to be a disappointing spectacle that could best be described as a war of attrition, with few highlights.

Gear’s try came in the dying minutes when Salford’s Harold Osbaldestin caught a Barrow clearance kick and booted it straight back towards Barrow’s line. The ball bounced awkwardly and Barrow captain Alec Troup caught it but then threw out a wild pass.

As Gear recalled: “I ran up and kicked it with my left foot, but not too far and I managed to catch it on the bounce.” Gear touched down to the right of the posts, and, although Risman missed the conversion, the final whistle went immediately afterwards.

The Barrow captain Troup almost certainly made his own little piece of history by becoming the only man born in the Orkney Islands to captain a Challenge Cup Final team.