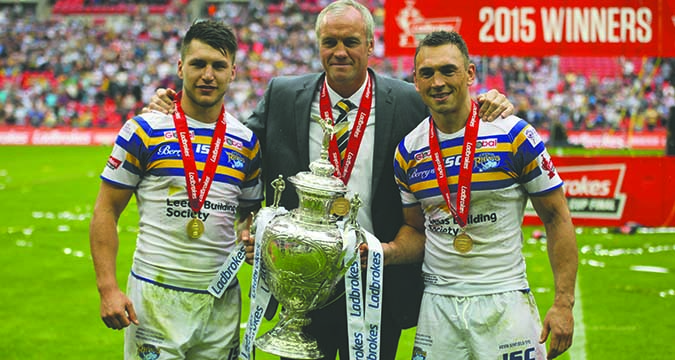 Leeds Rhinos won the Challenge Cup for the thirteenth time on their last visit to Wembley in 2015, establishing a record winning margin with their 50-0 victory over Hull Kingston Rovers, with winger Tom Briscoe scoring five tries – a record for a Challenge Cup Final.

Only Wigan have won the Cup more times than Leeds, and on the 29th August five years ago (the 120th birthday of the Northern Union, later to become the Rugby Football League) the Rhinos, under the coaching of Brian McDermott, served up a masterclass, completely outclassing the Robins.

By the 20-minute mark they were already 16-0 up through tries by Brett Delaney, Danny McGuire and Briscoe, who would add another four in the second half along with tries by Brad Singleton and Rob Burrow, with Kevin Sinfield kicking seven goals in total.

Inevitably the stats from the game were overwhelmingly in the Rhinos’ favour.

And it was a season in which Leeds would say goodbye to three of their iconic players of the modern era, as Jamie Peacock and Kylie Leuluai both retired at the end of the season (although Peacock would make a brief comeback in 2016 with Hull KR) and Kevin Sinfield joined Leeds’ sister club in Rugby Union, Yorkshire Carnegie, for a season playing the other code.
Inevitably Tom Briscoe was awarded the Lance Todd Trophy for his outstanding try-scoring feat, but apart from the rugby, the 2015 Challenge Cup Final was notable for two other things.

Prior to the game there was the unveiling of the Wembley statue featuring five of the greatest players to have played at Wembley, including former Salford captain Gus Risman, as well as Billy Boston, Alex Murphy, Eric Ashton and Martin Offiah.

And then there was the moving performance of ‘Abide With Me’ by Lizzie Jones, the wife of Danny Jones, who had died in May of that year while playing for Keighley Cougars in a game at London Skolars. Few people who were there that day will forget Lizzie singing Rugby League’s anthem, nor of her walking off the field carrying her two twin babies in her arms.
That was a truly emotional occasion for everyone who saw it.