League Express was launched in September 1990, in those long-ago days of winter Rugby League, meaning that our first Challenge Cup Final was in April 1991, when Wigan defeated St Helens 13-8 at Wembley.

One of my main memories of the game was of Ellery Hanley being put through his paces before the kick-off to test his hamstring, which he had pulled in an earlier game in Wigan’s extremely heavy schedule of matches.

As it turned out, Ellery was passed fit to play, but it wasn’t hard to tell that throughout the game his leg wasn’t quite working as well as it normally did.
But that was Wigan’s fourth successive Wembley triumph, and they would have four more before Saints broke their hold on the trophy by beating Bradford Bulls in 1996.

Since then, there have been many wonderful and iconic moments in the Challenge Cup Final, both at Wembley and elsewhere.
And League Express was there for every one of them.

Here is a selection of six of our most iconic front pages during that period. 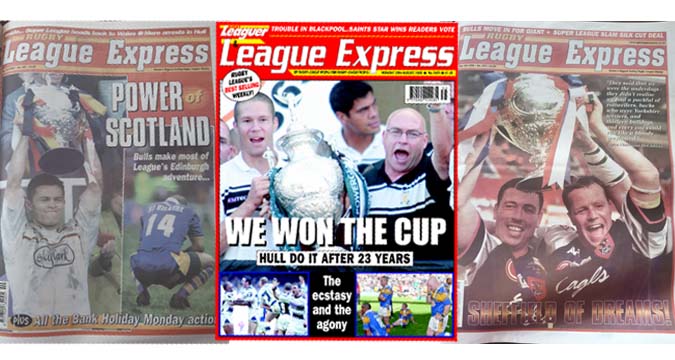 Then we have the first Challenge Cup Final played away from Wembley, when Bradford Bulls defeated Leeds Rhinos at Edinburgh’s Murrayfield Stadium.

Then we have Hull FC’s 25-24 victory over Leeds Rhinos at the Millennium Stadium in Cardiff in 2005. 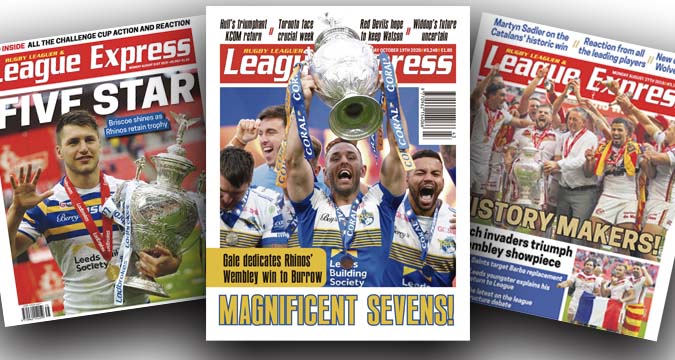 In 2015 we were back at Wembley as Leeds winger Tom Briscoe scored a record-breaking five tries.

And finally, last year, the Rhinos won it again, becoming the first club to win the Cup in front of an empty stadium.

Thank goodness in 2021 this year’s Cup Final will be played in front of a crowd.