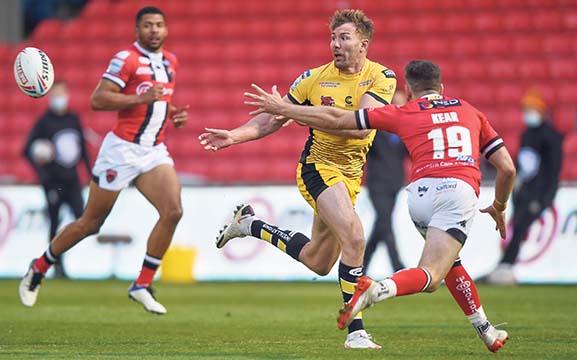 It was the last time Castleford won the Cup, although they paid return visits to the capital in 1992 and 2014, losing to Wigan and Leeds respectively.

The latter game was Shenton’s only appearance at Wembley so far.

So being able to parade the Challenge Cup back in Castleford would be the perfect birthday present, particularly when the club is coming to the end of the Daryl Powell era.

It could also be Shenton’s final year with the club for which he debuted against Wigan in a 28-42 home defeat on May 1, 2004.

Seventeen years later, the former St Helens player is reluctant to speculate on his future, although such has been his form this season that it would hardly be a surprise if his career were to be extended by at least another year.

Shenton has long been an outstanding centre for Castleford and the only surprise is that he won as few as twelve caps for England between 2008 and 2014, missing out on selection for the 2013 World Cup for a squad which was then coached by Steve McNamara.

He admits he can’t wait to get back to Wembley to try to finally win the major trophy that has eluded him during his long career.

Apart from that defeat in 2014, Shenton also featured on the losing side in two Super League Grand Finals, both of them against Leeds – for St Helens in 2011 and Castleford in 2017.

And he admits that watching the big crowds at Wembley for the European Championships football tournament has heightened his sense of anticipation or the big day on Saturday.

“I’ve been watching the Euros and the atmosphere created by the crowds has been incredible,” he says.

“To get to play at Wembley and having a crowd and atmosphere is what we all want. Being able to have over 40,000 people in the stadium will be a massive added bonus.

“We’ll take a lot of supporters because Rugby League is in your DNA when you’re from Castleford. We are fortunate to have loyal and great supporters and it will be a great occasion.

“We are all aware that it was in 1986 when we last won the Cup, the last time we won a major trophy, and the club has had a lot of ups and downs since then.

“We have been in some big games since then and we have put ourselves in some great positions to play in big games, but like in 2014 and 2017, we’ve just not been able to get the job done.”

Shenton is confident the Tigers are well equipped to win the Cup and that the credit for that has to go to coach Powell.

“We were bottom of the table in 2013, when Daryl joined us, and that led to a fantastic season in 2014 when we massively over-achieved. We got to a Challenge Cup final against a very-experienced Leeds team and they executed their game plan to perfection.

“I just think the club is in a better place now. Our players are better at managing games. And I feel we are more mature and confident than we were in 2014.

“We realise we have to start well, with our halves putting in dominant kicks with a good chase. Obviously there will be some nerves, but if we can put a strong team out there, we can compete with anyone.

“We realise that St Helens are the pinnacle of the competition. They are consistent, whereas we are far more inconsistent, up and down a little.

“But I massively believe in us under Daryl, who has been such an important person for my career and for the club.

“Since he came, our fortunes have changed and under him we are contenders for all the major trophies. To send him off with the Challenge Cup would be fantastic.

“For me personally, it would be fantastic and it would be a great way to make the end of an era with him leaving.

“For the game itself I’m expecting us to have a similar team to the one that beat Warrington in the semi-final. We kicked well that day and defended exceptionally well.

“Of course Saints are a different animal, with some great players, and we will have to play to the best of our ability to get the job done. But I’m confident the team Daryl will put out will be able to do just that.”