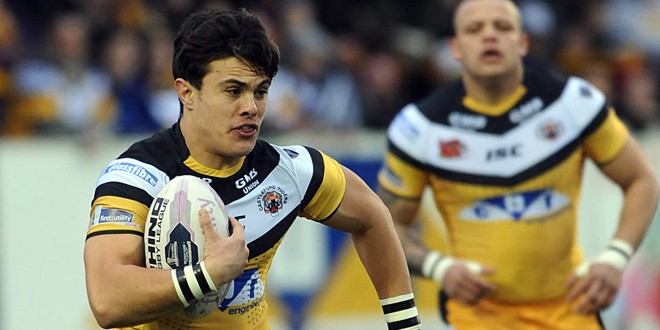 Castleford Tigers centre Michael Channing insists that Rugby League cannot turn its back on London, after their difficult start to the season continued with another defeat last Thursday.

The Broncos have now lost their first seven games of the season, the most recent a 54-6 drubbing at the hands of the Tigers in front of the TV cameras. Channing, himself a former Bronco, crossed for a try against his old club and he believes it is important to stick with London, even if they are relegated.

“The game definitely shouldn’t turn its back on London,” Channing claimed.

“You can only look at some of the talent London has provided: Kieran Dixon had an unbelievable season last year, but has been unlucky with injury this time around. Dan Sarginson has been signed by Wigan along with Tony Clubb, so there’s a lot of talent down there. It would be a shame to completely halt that and lose it all to union.

“It’s hard to put your thumb on one thing in particular that is wrong; when I was down there I just concentrated on training every week. But obviously the fanbase needs to get better and bigger, so maybe the way they promote the game needs to change. But it’s difficult when you’re surrounded by union clubs all across the city.”

Channing isn’t sure that the Broncos will be one of the two sides to drop out of the competition this year. The 21-year-old claims they will get stronger as the season goes on.

“Obviously they keep getting new players drafted in. They seem to have a lot of players settled in now, so you can see they are building as a team.

“Even though it was a heavy defeat against Leeds you could see glimpses of quality coming out. I think that’s a good thing and they’re only going to build as the season goes on.”

Channing also admits he is loving life at his new club, having never even been in the North of England, other than when playing rugby, before signing for Castleford

“It’s certainly different! I’ve never been up north before in my life apart from when I played games. It’s different but I love it up here.

“Everyone’s just really nice; they seem to be a lot nicer than southerners. The sport itself is really big up here as well, so it’s good to see healthy followings and good crowds all the time. It’s great to be a part of.”