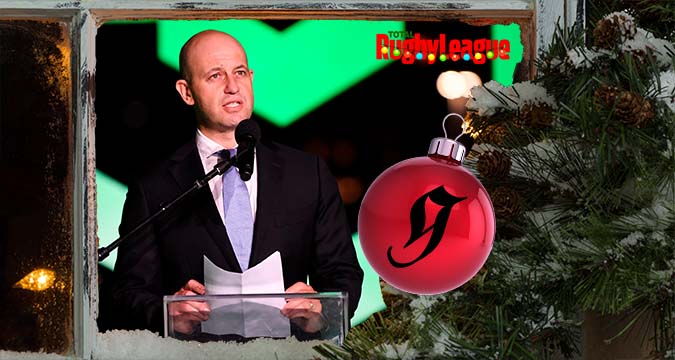 Every year we get to the point where either the Super League or the NRL announce the rule changes.

For most sports, this tends to be just tiny, minuscule alterations.

But not rugby league.

Every year, both top-tier competitions tend to throw in a big-un and this year the NRL has stunned us all with the revelation that 20/40s are now a thing.

But of course, they kind of already are! In the RFL’s Laws of the Game, it states that teams can, when taking a tap on the 20m, take an optional kick. And as far as I’m aware, if that crosses the line in your opponents 40 after bouncing, then you get the scrum.

It does, however, seem to be an odd rule change. There are plenty of things to change before you even think about introducing that one. I’m not sure if anyone will even take advantage of the rule. It’s risky. If you mess up, then you’re handing your opponents prime field position.

They didn’t stop there with the unusual rule changes, though. Now, the attacking team can choose where they scrum down. Why? What’s that going to add to the sport? It might even mean dragging half the players across the field to scrum down ten metres from the sideline. The attacking team can now elect to feed the scrum ten or 20 metres from the sideline as well as directly in line with the two black dots. It seems a pointless change to me!

The NRL say they want to make the game easier to officiate but this change doesn’t really go anyway to making that a reality.

As baffling as that change is, the next one is potentially what we’ve been looking for. The idea of a captain’s challenge.

This one isn’t set in stone but the operational details of the change will be in a report provided to the commission in February.

We saw an accurate representation of this in the Ashes during the summer. With the cricket match on the line, the Australians used a challenge on a leg before wicket call. But the challenge was in desperation and was wasted. So when a call went against them that was “challengeable” later in the over, they were’t able to use it because they’d wasted it on a frivolous challenge earlier.

This should eradicate all complaining by team’s captains towards the referees. If you think it’s incorrect, you challenge it. And if you can’t, it’s because you got one wrong earlier in the game when the referee was right.

Obviously, the details of this need to be worked out. But in my opinion, both the NRL and Super League would be barmy not to implement this change as soon as possible. Away with the video referee. Let the referees make a call and if the teams don’t like it, then put your metaphorical money where your mouth is.

Another change brought in by the NRL concerns player safety. Now it is totally illegal to tackle a player in mid-air aligning them with the international laws of the game.
Other changes include when the ball strikes the referee, they now have the right to replay the previous play-the-ball. That makes perfect sense.

And the time in which trainers can be on the field could be limited. The specific constraints will be finalised prior to the commission meeting in February.

It’s a popular gripe with fans on the terraces so this should please them at least!

One thing is for sure, the NRL had a poor year concerning the performance of the referees and those in charge of them. Graham Annesley, the head of football elite competitions, publicised all their mistakes to the world and frankly the quality of refereeing dive-bombed as more and more people began to watch them a magnifying glass.

Hopefully, in the midst of these changes, he’s been working hard on a new way to help his referees because 2019 caused plenty of chaos and they don’t want a repeat of that in 2020.