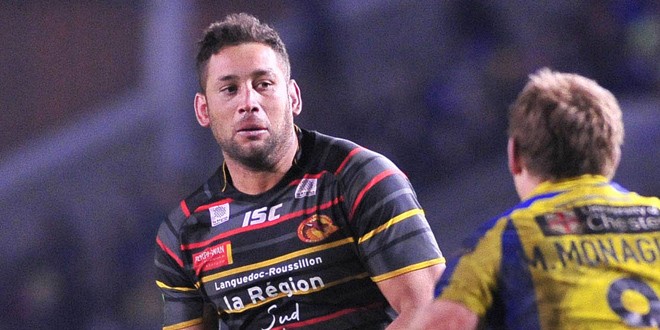 France captain Elima, 30, played with Fakir at Catalan Dragons either side of his two seasons at Odsal, and was the link between Cummins and the front-rower, who signed a season-long deal with the Super League club this week.

The 31-year-old was one of the Dragons’ highest-profile players before he was asked to drop to the reserves following a humiliating 56-14 defeat against Wakefield on March 9. Fakir refused and became a free agent, though it looked like his professional career was over.

Cummins told the T&A: “When Jamal had his fall-out with Catalan, we approached them and they were willing to loan him to us.

“But Jamal didn’t want anything to do with them so we let the dust settle a bit and he became a free agent. That was even better because we need to keep our loan spots open.

“Jamal and I had spoken on the phone and we have got Olivier Elima in France who we could talk to about Jamal. Is he retiring? Is he ready to go again? Does he have the desire? Oli gave us his opinion and Jamal arrived on Wednesday night before going for dinner with a few of the players, which was really good.

“He is a hardened, senior prop and is not someone you want to run into. He is just what we need and he has a point to prove.”

Fakir said: “After the Wakefield game, I wanted to stop playing for one month and stay with my family to decide what I wanted to do.

“Three weeks ago, Olivier Elima told me ‘Francis wants you to come to Bradford’ but I said ‘no, for the moment I want to stay at home’. But in my head I wanted to play again because I’m only 31. This a new chapter for me here at Bradford. This is my life now and I want to find my best Rugby League in the next five months. I’ve been training alone for the past four weeks and I’m ready to give 100 per cent for the Bulls.”