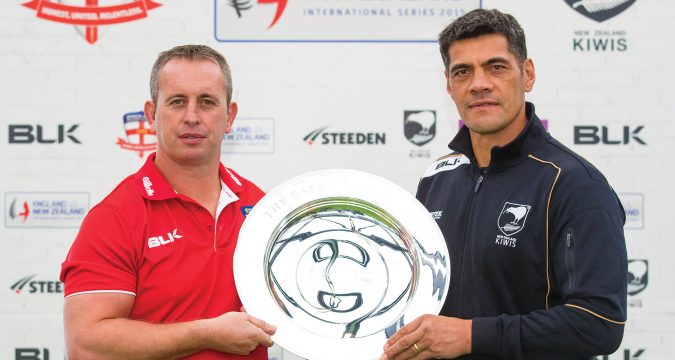 England announced their 19-man squad for the third and final test with New Zealand yesterday, and it’s fair to say it caused uproar amongst fans.

Steve McNamara made two changes in what could be his final ever squad as England head coach, with his contract expiring after this match.

Matty Smith and Jermaine McGillvary were called up to replace Ben Westwood and Leroy Cudjoe.

As the debate continues to rumble on, we asked our senior reporters who they would pick for the winner takes all showdown at Wigan.

I haven’t seen enough from Joe Burgess or Ryan Hall to suggest they should be dropped. One change I would make is in the halves; it’s certainly not a public dismembering of George Williams, but he and Gareth Widdop seem too similar. Matty Smith’s leadership and experience at this level will stand England in better stead. I’d also be inclined to start Brett Ferres, as I feel he gives England a real lift when on the field.

Joe Burgess has done nothing wrong, but for me Jermaine McGillvary should have played from the start of the first test after his Super League form, his workrate is invaluable at this level. I’m a massive John Bateman fan, but playing him at centre to fit him in is wrong. I’d play McGillvary’s Giants teammate Leroy Cudjoe and move Bateman to the bench for his versatility. Luke Gale is untested at this level, but George Williams isn’t a scrum-half, and Gale’s support play is exactly what England are missing. Brett Ferres is phenomenal and should play from the start, whilst Westwood’s size gives him the nod over Liam Farrell on the bench, although I’m very reluctant to be leaving Farrell out.

I have gone outside the 23-man England squad for four of my selections in Michael Shenton, Danny McGuire, Adam Cuthbertson and Daryl Clark.

In my view each of those four players give England some great attacking options. Shenton is still the best left centre in British Rugby League in my opinion, and he would form a terrific left-side pairing with Joe Burgess, while the pairing of Kallum Watkins and Jermaine McGillvary on the right hand side would also be menacing for the Kiwi defence.

In the halfbacks I would combine McGuire and Luke Gale. In my view McGuire is possibly the smartest player in Super League these days, and I have no doubt that he is still the best and most accurate passer of a ball in the competition. He would enjoy, I’m sure, a tremendous combination with Gale, who is elusive while being a great support player, and has a fine kicking game.

In the forwards I would begin the game with James Roby at hooker, while having Daryl Clark on the bench as an impact player. Clark might not have been at his best in 2015, but in my view he would still have a lot to offer the England team on the bench alongside John Bateman, who I would move to the bench from the starting centre position. I would also bring in Adam Cuthbertson onto the bench to give England plenty of attacking options at either prop forward or loose forward.

Disagree? Let us know on Twitter, or log in to the TotalRL.com forum to give us your team!