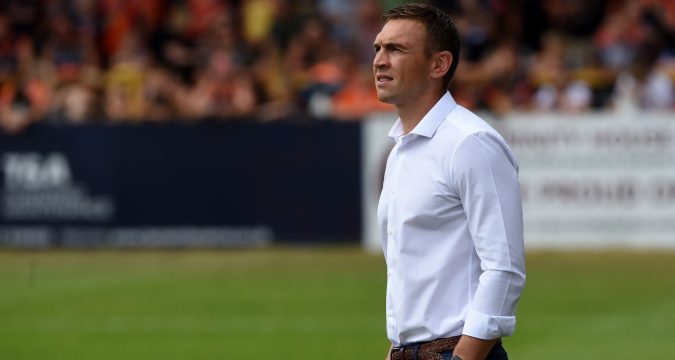 Kevin Sinfield knew he was putting his legacy on the line when he returned to Leeds Rhinos as the club’s Director of Rugby.

An unrivalled career had seen him establish himself as the club’s greatest ever captain and one of its greatest ever players. Under Sinfield’s leadership, Leeds enjoyed the greatest period in its history. Legendary status had been obtained. By returning, he risked losing that.

“I could have turned it down and protected my playing career but what do you do if you shy away for the rest of your life? Why wouldn’t I return to help the club I love?”

When he returned, he came back to a club that he infamously described as ‘rotten’.

“I said the club was rotten, I stand by that, I have reflected on it, but that’s how I felt,” he said.

“There was a narrative off the back of that interview with Brian Carney but it was misinterpreted.

“Everyone thought it was aimed at Brian McDermott but it wasn’t at all. Everyone thinks we hate each other but we’re really good friends, one disagreement doesn’t change that. We’re both stubborn but he’s the best coach I played under. I would have loved to work alongside Brian and I do think I’ll work with him again. Brian had a responsibility, but so did Gary and our senior playing group. Management makes decisions but it’s the players who drive the cultures and behaviours.

“So when I used that word rotten, I think it was misinterpreted. But that’s how I felt about the place. It wouldn’t be fair to tell you some of the stories but we had to change it fairly quickly.”

Sinfield went about driving change and bringing the club back in line with the principals that had delivered so much success during his trophy-laden playing days.

He looked to drive a new culture, sort out a problematic salary cap and bring through a new era of homegrown talent.

That, however, didn’t come without challenges, mistakes and harsh lessons early in the process.

Another challenge was to appoint a head coach. The man he picked was Dave Furner, a former team-mate of Sinfield’s who he sacked after just 14 Super League games.

“That was my mistake, I got it wrong.

“We had to put the club first which is at the forefront of every decision I make. There was a bloke there I’ve been friends with a long time and it caused pain and discomfort. I chewed over it for a long time but I knew it wasn’t right and we changed path.”

In making that decision, Sinfield walked into the firing line. The Rhinos found themselves in a relegation dogfight, humiliated after a Challenge Cup defeat to arch-rivals Bradford and with an underperforming squad that had been injected with three major overseas signings.

“I got criticism for it but I was OK with that, I’d had it throughout my entire playing career.

“Look in the business world and when people are appointed to top leadership positions and how many times they get it wrong. It’s frightening actually. I took some comfort in that I’d got one wrong but wouldn’t get the next one wrong.

“Throughout my playing career I’ve found that the best leaders are willing to be unpopular because they’re willing to make the tough decisions nobody else wants to make.”

Appointing Richard Agar was another unpopular decision among a fanbase seeking a bigger, more reputable name.

“That wasn’t difficult at all.

“I’d only known him a few months properly but we were closer on structures, academy and recruitment. It’s a bottom up approach but when you have 15,000 fans at home you can’t have a first-team that’s not competing and winning trophies. We had to go two-pronged and Richard knew that.

“He’d seen everything play out and we have similar views on where we took the club. As I said, the best leaders make the decision that’s right for the group and the club, it’s easy to make a popular decision but I knew from my playing days I’d made decisions that would be ridiculed and make people think I’m crazy but I’d go with my gut.

“Rich probably wasn’t a popular appointment but he was the right appointment, he was what we needed and a great fit.

“The cap needed some work and Rich has been important in that. It’s a joint effort between some people. It wasn’t where it needed to be and there’s nobody to blame for that, but it is in a far better place now.

“We’re going to get some wrong, make calls on players that aren’t right, but we’re getting it into a better place and looking like it should.

“The philosophy has always been to bring through homegrown talent and sprinkle world class players from wherever and put a team together that the city can be proud of. We knew what it needed to look like.”

Together, Sinfield and Agar, as well as Hetherington and the playing group, have put the club back to Wembley for the first time in five years and in a major final two years into a three-year project. You’d argue Sinfield got this decision right.

“I’d like to think the rebuild has finished and now we’re just building.

“We always thought it would be three years and I still think next year will be the year where we get where we wanted to be and there will be no excuses regarding Covid as I believe in where we’re heading.

“It’s not trying to reinvent what we did in that golden decade, it’s evolving and going on that journey.

“The young players have been outstanding and retention has been crucial. You need that core group of homegrown who run the culture and behaviours and understand what it means to play for the club.

“The youth system was not broken at all, it was producing kids and done some wonderful things, but to bring it all together from a distance with a pair of eyes and not just someone with his eyeballs in it helped us assess and look at everything we were doing.

“If you look at two of our games; Warrington on Tuesday and Catalans, the amount we had on debut, the quality we have coming through, the opportunities they’ve got, it’s exciting.”

As for Sinfield, the journey doesn’t end at Wembley, whether the Rhinos walk up the famous steps or not on Saturday.

“I certainly am delighted we’re back in the final but I still think we’re building and next year will be a really good year. I just want the club back where it should be.

“Saturday will be a special day. I’m delighted for the players and the staff and the many good people who have shown support of me. I’m lucky as it would have been easy to jump on the bandwagon, say I don’t know what I’m doing and kick me out. Gary has been great in it all, very strong and when you have that at the club and have sporting direction you can move forward.

“But we have a philosophy of creating our own succession plans, producing lads within our pathways and the same with the girls and women’s game which is so important to our club.

“We want to be competing for trophies and have a club the city is ultra proud of.

“But I don’t think that’s right to just judge a club on trophies, you shouldn’t judge that golden era on that, there were a number of things and one is the number of homegrown players we brought through.

“The philosophy hasn’t really changed, it’s just with different people who are trying to make us better, that’s the big thing.

“If we were going to go back to where we were in July 2018 and compare it to today, you couldn’t do that by taking huge strides. I’ve certainly got plenty wrong but I know what they are. It’s important to reflect, understand and learn and I’m proud of everyone for where we are today.”