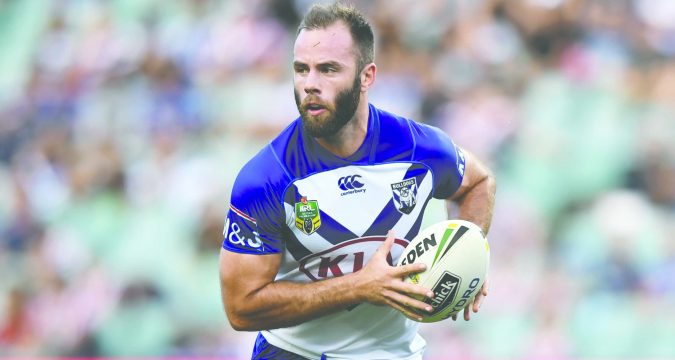 Huddersfield Giants have completed the signing of Canterbury Bulldogs halfback Matt Frawley on a two-year deal.

The 23-year-old has agreed on terms with the Giants and will add to their halfback ranks heading into the 2019 season.

Frawley, who made 31 appearances for the Bulldogs, was widely expected to join Newcastle Knights, but the Giants have swooped to make him their second official signing ahead of Simon Woolford’s first full season in charge.

Frawley made his NRL debut last season and made 18 appearances for Canterbury as they finished eleventh in the Australian competition. He started this year’s campaign as the Bulldogs’ first-choice halfback, but only went on to make 13 appearances.

With Kieran Foran, Lachlan Lewis and Jeremy Marshall-King all signed up with Canterbury, Frawley was not offered a new deal with the club, and the Giants have beaten several NRL clubs to his signature for 2019.

The move will see Frawley re-unite with Woolford, having worked with the Giants chief during their time together with the Canberra Under-20s.

Tom Holmes has already been drafted in to bolster the club’s halfback options next season and Frawley will join forces with the former Featherstone halfback and Lee Gaskell in the pivots next year.

His arrival will help fill the void left by Danny Brough, when his expected move to Wakefield is completed.

Meanwhile, Frawley’s arrival looks set to pave the way for Jordan Rankin’s departure from the Giants.

It’s understood the Australian is free to leave Huddersfield and has been offered around other clubs in recent weeks.

Rankin is under contract at the John Smith’s Stadium next year, but the club’s signings have made him surplus to requirements next season.

Frawley’s arrival leaves the club’s halfback spots allocated, and although Rankin spent most of the year at fullback, it’s believed Darnell McIntosh is set to take that role next season, with Akuila Uate likely to take his role on the wing, with the Giants expected to announce the arrival of the Fiji and Australia international in the coming weeks.

With Rankin taking up a quota spot and a significant salary, the Giants are keen to move the 26-year-old on and are understood to be keen on securing a season-long loan deal for the former Hull FC man.