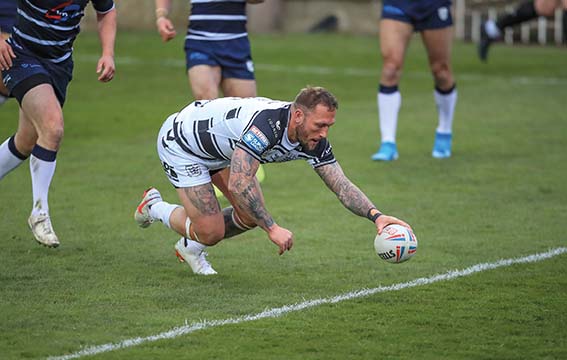 Castleford Tigers forward George Griffin says his elder brother Josh can return from his Hull injury hell stronger than ever.

The 31-year-old centre’s World Cup dreams ended when he snapped an Achilles tendon during his side’s Challenge Cup semi-final defeat by St Helens.

Tigers star George, 28, who featured as his side’s 30-12 Super League loss at home to Hull on Thursday, has been in daily contact.

“He’s had his operation now and he’s keen to get going with his recovery,” he said.

“Josh is in great nick – the best I’ve seen any 31-year-old in. I’m sure he’ll come back stronger next year.

“I was devastated for him, he was in great form. I think he should have been in the England set-up for the last few years but he’s in this year and was looking good to get a run into the World Cup.

“That wasn’t to be and I’m absolutely heartbroken for him, but it’s part and parcel of the game.

“He was a bit rattled, but he’s got a good support network around him who are checking in with him all the time.”

On the incident itself, George added: “It was a strange one – I think Saints were within their rights to play to the whistle and score the try.

“It’s a tough one and I haven’t really seen another situation like it. It’s just gut-wrenching when it’s your brother and he’s out for the full year when he was likely to get a run with England.

“He was playing really well at the start of the semi, and if he’d managed to stay on they might have got the win and we might have been facing them in the final.”

George has had his own frustrations this season in a couple of niggling injuries and then missing his side’s semi-final win through a suspension – the first of his career – that he felt was unfair.

“I was disheartened to find out I was getting a charge on Monday; we appealed it on Tuesday and to get knocked back again with a £500 fine was tough,” he said.

“To me, the challenge wasn’t as vicious as was made out. It was my first charge in more than 180 first-team games and to miss a semi-final was very frustrating, although the boys did a great job without me.

“It’s been a stop-start season for me. I missed the warm-up match and the last few weeks of pre-season with an ankle injury, and then I got back for a couple of games and got an injury to my shoulder. Then just as I started to get a good run of games, I got a ban.

“There are things to improve on, but I think that will come with games – it’s still pretty early in the season.”